Tacoma, Washington four-piece Emumclaw have announced their debut EP. It’s called Jimbo Demo and it’s out April 30 via Youth Riot. They’ve also shared the new single ‘Free Drop Billy’, alongside an accompanying video directed by the band and snapclicktristan (aka Tristan Johnson). Check it out below and scroll down for the EP’s cover artwork and tracklist.

“Where I grew up, a lot of people are townies, or losers. I sometimes have survivor’s guilt about it,” lead vocalist and guitarist Aramis Johnson said of the new song in a press release. “I went to college, and I’ve done some stuff that a lot of people I know in my life haven’t. It’s about not wanting to fall back into the traps of things like that, about not wanting to end up like some of my friends. I don’t want to get stuck.”

In addition to Aramis Johnson, Emumclaw also features Ladaniel Gipson on drums and Nathan Cornell on bass. Johnson’s younger brother Eli Edwards joined the band as a bassist after the EP was recorded. Jimbo Demo includes the previously released single ‘Fast N All’. 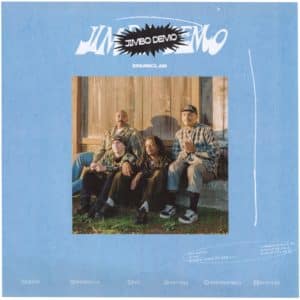