After being canceled for the second year in a row due to the pandemic, Glastonbury has announced a ticketed livestream event on May 22 featuring Coldplay, HAIM, Damon Albarn, Michael Kiwanuka, and Wolf Alice. Other acts performing on the five-hour event, titled Live at Worthy Farm, include Jorja Smith, Kano, IDLES, and Honey Dijon, as well as a number of surprise guests, with performances being shot from various festival landmarks including the Pyramid Field and Stone Circle.

Each set in the production will be directed by Paul Dugdale, with airings staggered across four time zones. Tickets for the livestream are on sale now at £20 ($27.50, €23, or AUD$35) per stream and can be purchased here. According to The Guardian, the performers have waived their fees, with funds going to support the festival and its charities following the £5 million loss from having to cancel in 2020. 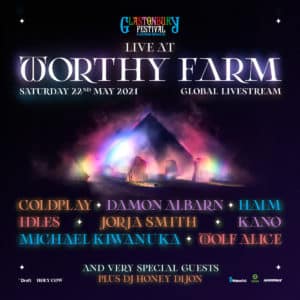