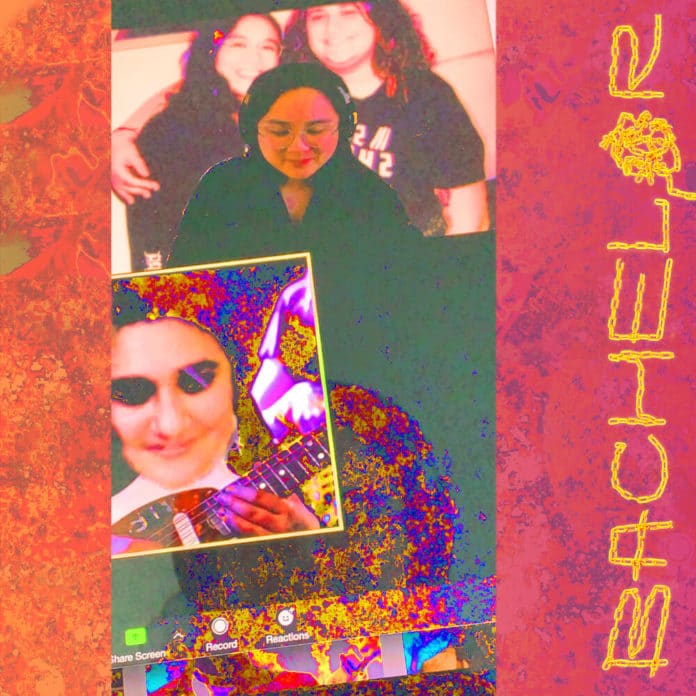 “I’m your biggest fan,” the first line heard on Doomin’ Sun – the debut album by duo Bachelor – blooms with sincerity. The song, ‘Back of My Hand,’ is carried by upbeat rhythms and playful guitar hooks that are nonetheless draped in the bedroom aesthetics listeners have come to expect from the projects of members Melina Duterte (Jay Som) and Ellen Kempner (Palehound). The song could easily be mistaken as a surface-level telling of an adoring child fan, but it’s clear the duo are working on a deeper level. Lines like “Do I wanna be you or be your friеnd?”, delivered with sweet yet restless energy, make that clear.

As Bachelor, the duo work on this plane throughout the album, exploring relationships and love – and the pain that can come from them – from a perspective that’s all their own. They examine the similarities between love and friendship, and question if they’re mistaking one for another. The single verse of ‘Sand Angel’ blurs the lines between closeness and feeling suffocated, even trapped (“As you toss me, turn me/ And I’m sweatin’ through the sheets”). The duo up the ante on the sparse ‘Went Out Without You,’ where the twinkling and anxious guitar strums that run through the song reflect the uncomfortable dynamics of internalized insecurity (“I fear what would happen if you didn’t care”). Yet Bachelor play and sing through the song with a level of vulnerability that demands nothing but empathy.

And despite the occasional heaviness of its lyrics, Doomin’ Sun remains a cozy album at heart that also expands on the aesthetics that Duterte and Kempner are known for. ‘Anything At All’ plays like the duo’s take on a track by The Go! Team; the song slides from crunchy guitar lines to glistening guitar plucks, while the chorus is delivered with a teasing playfulness. Album highlight ‘Spin Out’ rumbles with layers of dreamscapes and hazy vocals that successfully evoke the song’s title. The strings and piano give the ballad ‘Aurora’ an extra layer of sentimentality that compliments Bachelor’s examination of a particular night with a friend (“Mid October, bored in North Conway/ Startin’ up a ball game”). Yet the verse’s final line – “And I took the joke too far again, again” – calls into question their relationship with their memory.

This isn’t the only track that puts particular moments under the microscope. The pop-punk-tinged ‘Stay in the Car’ is the loudest track on the album, and one that precisely captures how those in love dramatize the littlest moments (“Pop the trunk, slam my door, peel off/ Cloud of smokе while she just smokes”). Yet no matter the speed, Bachelor capture a very real truth: people can’t predict which moments are the ones that will stick with them.

Album Review: Bachelor, 'Doomin' Sun'“I’m your biggest fan,” the first line heard on Doomin’ Sun - the debut album by duo Bachelor - blooms with sincerity. The song, ‘Back of My Hand,’ is carried by upbeat rhythms and playful guitar hooks that are nonetheless draped in the bedroom...