Dublin-born, London-based singer-songwriter and producer Orla Gartland has announced her debut album, Woman on the Internet. It’s out August 20 via her own label New Friends, and the new single ‘Do You Mind?’ is out today. Check it out below, and find the LP’s cover art and tracklist, too.

“Announcing my debut album feels like a moment I’ve been waiting for for years. Something clicked into place last year – I grew into my role as a producer and lyrically I knew what I wanted to say,” Gartland said in a statement. “Although this album was made in 2020 it isn’t laced with lockdown blues – it feels more like the soundtrack of new time to me; a sunnier time, a more hopeful time. I’m so proud of this record and beyond excited for everyone to hear it!”

Commenting on the themes of the album, she added: “When I was a few songs into writing the album it became clear that Woman on the Internet is about the chaos of my 20s. It’s a different chaos to your late teens, such a different brand of angst. I feel so much more settled and sure of myself now than I was when I was 18 or 19 but I’m still just half the person I’m going to be and to capture that became really important.”

In addition to the album, Gartland has also announced a run of UK and Ireland headline shows – tickets go on sale Monday (June 14) at 10am. The list of dates is also below.

Woman on the Internet will follow Gartland’s first two EPs, 2019’s Why Am I Like This? and Freckle Season. She previously shared the tracks ‘Zombie!’ and ‘More Like You’.

Woman on the Internet Cover Artwork: 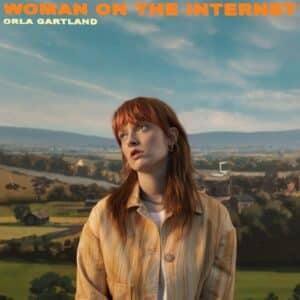 Woman on the Internet Tracklist: