Absolutely Free have announced their first album in seven years: the follow-up to 2014’s self-titled debut is called Aftertouch and it arrives September 24 via Boiled Records. The Canadian group, whose core lineup includes vocalist and multi-instrumentalist Matt King, Michael Claxton on bass and synth, and Moshe Fisher-Rozenberg on drums and synth, have also previewed the album with the lead single ‘How to Paint Clouds’. Check it out below and scroll down for the album’s cover and tracklist.

‘How to Paint Clouds’ is accompanied by a music video made via “an algorithm built from 2000 internet-sourced paintings of clouds teaches a computer to create its own original paintings of clouds.” The band elaborates, “Although there are unimaginable forces at play in developing a cloud, or in creating art, all we are able to look for is another face in the sky, a mirror looking back at us. A cloud always looks like something other than a cloud.”

In addition to ‘How to Paint Clouds’, Aftertouch will feature the 2018 track ‘Still Life’. In 2019, Absolutely Free shared the EP Geneva Freeport. 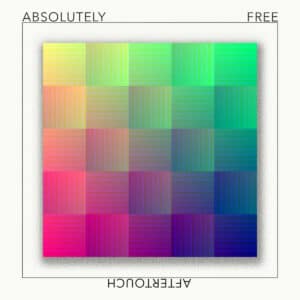