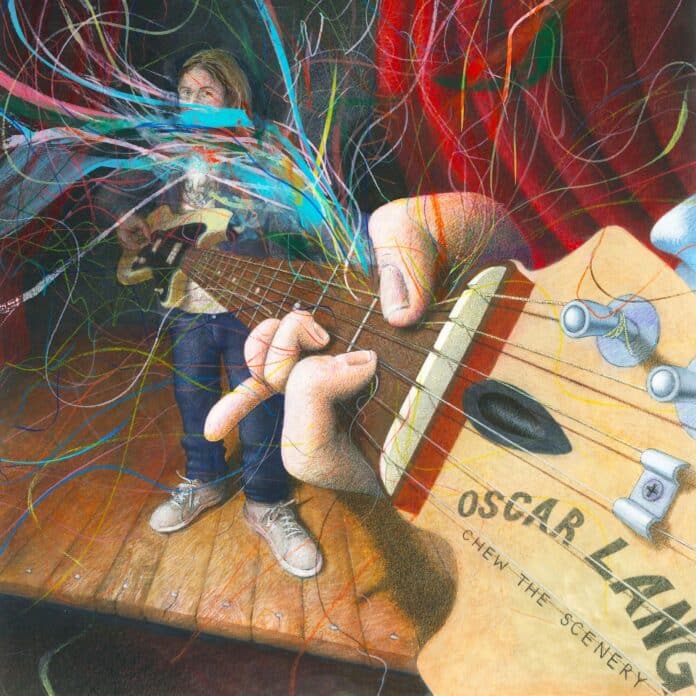 When your debut album has been as anticipated as Oscar Lang’s, perhaps it’s acceptably bold to title the first track on it ‘Our Feature Presentation’; Lang, the London singer-songwriter, knows his own worth. After a string of well-regarded EP’s and many buzzy singles, his first full-length, Chew The Scenery, is an endearing hodgepodge of styles and fronts that demonstrates plenty of promise, even if his place in tomorrow’s music landscape remains unclear.

Several of the album’s tracks – ’21st Century Hobby’, ‘I Could Swear’, and ‘Stuck’ – are too reminiscent of bravado-fuelled indie landfill, the sort of scuzzy rock that marked post-’90s Oasis. That rollicking but vapid trio of tracks almost undoes the great work of that aforementioned opening, a cleverly-constructed introduction whose electronic flourishes sound very much indebted to Tame Impala (another instrumental interlude arrives later, ‘Intermission’, which recalls the weird fuzz of Daniel Johnston).

It’s when Lang settles into his groove as a pleasant and unthreatening presence that the album finds its feet. Coldplay marched at the front of the post-Britpop era, providing melancholic contemplation in lieu of macho posturing, and although it might not be as overtly ‘cool’, it undeniably has its place. So ‘Write Me A Letter’, with its lovelorn piano line, seems to capture the spirit of Lang As Artist better. After its aching falsetto opening, ‘Final Call’ contains sweet strings and tender keys. The jaunty ‘Are You Happy?’ might be more buoyant territory, but it doesn’t lack for that thoughtful palette.

There is a strong lyricist in Lang, too. These songs possess mature and honest outlooks, belying the youthfulness of their writer (Lang was born in 2000). ‘Quarter Past Nine’, with its darker and subdued hue, sees him questioning the merits of the Other Man a potential lover has chosen; ‘Take Time Out’ then contrasts this ruefulness by placing Lang as the ‘bad’ person, as he sings of being unwilling to deal with a relationship quarrel (“My head is throbbing/ Her eyes are sobbing/ It’s too early for this”). ’21st Century Hobby’ sees him bemoaning how addicted his generation has become to social media, sneering “How loud do you shout/ To drown others out/ It’s all for a show.”

Aged just 21, there is clear potential in Lang’s career. He’s already wisely disregarded the formalities of bedroom pop to explore indie rock, delicate electronica, and dream pop on this debut, mostly to success. He’s a capable songwriter with a mature and maturing perspective, which, distilled further, should provide hope for a more enjoyably cohesive second album.

Album Review: Oscar Lang, 'Chew The Scenery'When your debut album has been as anticipated as Oscar Lang’s, perhaps it’s acceptably bold to title the first track on it ‘Our Feature Presentation’; Lang, the London singer-songwriter, knows his own worth. After a string of well-regarded EP’s and many buzzy singles, his...