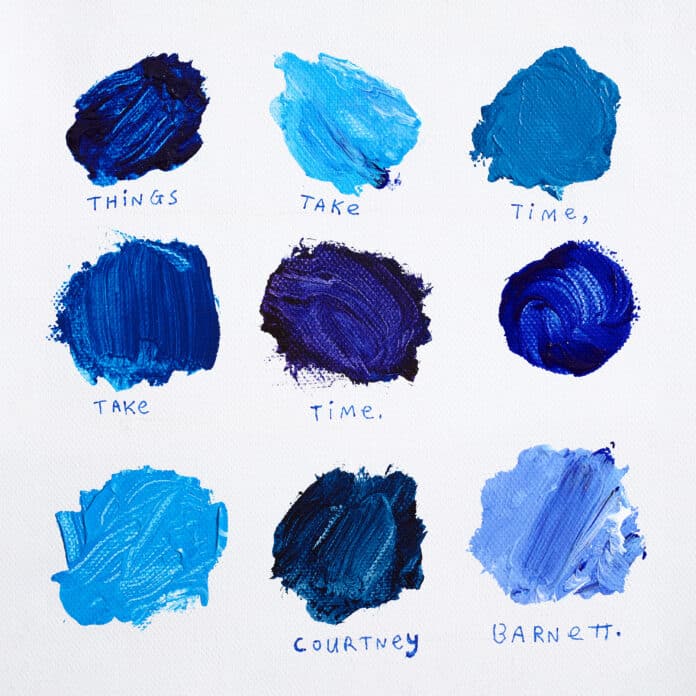 “Sorry that I’ve been slow/ You know it takes a little time for me to show/ How I really feel,” Courtney Barnett sings on her latest LP, Things Take Time, Take Time, a callback to its predecessor, 2018’s Tell Me How You Really Feel. You might have already guessed as much from the title of the new album, but she really does mean it: the line appears on the very last track on the record. It’s not a surprising admission, but she makes up for her tentativeness with a simple yet inviting proposition: “Won’t you meet me somewhere in the middle?”

If you’ve stuck around to this point, you’ve probably already agreed to take her up on that offer. True to its name, Things Take Time, Take Time unravels with the patient deliberation that only a trusted friend would have to endure, but once you settle into its narcotic flow, the rewards are plentiful. Barnett begins by looking out her window in Melbourne, Australia, cycling through a series of wry observations on the lead single ‘Rae Street’; its removed nature may be initially alarming, but her memorable hooks and apparent earnestness are enough to draw you in until she starts to open up more. For a songwriter whose masterful debut, Sometimes I Sit and Think, and Sometimes I Just Sit, earned her a reputation for turning the minutiae of everyday life into a source of profundity, here her goal seems to simply be to pay attention, perhaps asking you, if anything at all, to do the same. Sometimes her insights are interesting, sometimes less so, and that’s okay. “Put me on a pedestal and I’ll only disappoint you,” she sang on her debut; even more so than her previous album, Things Take Time is proof that sometimes, you just have to take her word for it.

That line from Sometimes I Sit anticipated the relatively lukewarm reception to Tell Me How You Really Feel, a richer if less consistently captivating set of songs that brought a new weightiness to Barnett’s biting lyrical approach. With the exception of a few lines from ‘Rae Street’, (“Hope and prayers, though well-meaning, they don’t mean a thing/ Unless we see some change/ I think I’ll change my sheets today”), the new album doesn’t aim for the same kind of ferocity, but it does continue the thread of her searching for the right words to express herself. This time, however, that struggle seems to revolve less around her art and the pressures of fame than her own personal relationships, making way for a more unburdened kind of vulnerability that shines through its rough-hewn arrangements. It is at once upbeat and reserved, existing at its own pace while still yearning for connection.

Barnett has always been an empathetic storyteller, but Things Take Time, Take Time might be her most generous collection to date. It’s this quality that animates the record’s strong middle run: on ‘Before You Gotta Go’, she breezily intimates her need to offer some words of affection before the inevitable end of a relationship, and the song is as entrancing as its subject matter: “You’re always on my mind.” Her own perspective is almost entirely absent on ‘Turning Green’, in which she sings, “I want you to tell me everything/ Tell me everything/ I’ve never seen you so happy.” Instead of disclosing all the details, she and musical collaborator Stella Mozgawa give the song enough space for her to channel whatever sentiments come up in the form of an expressive, exuberant guitar solo. It’s one of the few moments on the record where she allows the simplicity of the song to take its course; the following ‘Take It Day by Day’ packs a few compelling ideas into its two-minute runtime, but cuts itself short before her words of advice can really be cherished.

Throughout Things Take Time, Barnett exhibits a sense of gratitude that makes her sound genuine even when she doesn’t have something remarkable or poignant to say. When the instrumental works in her favour, like on the enveloping ‘Here’s the Thing’, the feelings naturally reverberate. Elsewhere, her self-awareness can turn a trite sentiment into a potent one, like when she promises someone they’ll “scream self-righteously” as they watch the world burn (“Sorta self-righteous, my heart of gold,” she once sang). Unlike many of her contemporaries, she doesn’t need to rely on a parasocial relationship to capture the listener’s attention or earn their trust. But that doesn’t drive her away from emotional honesty, which is ultimately what makes the album’s least exciting moments resonate. “Oh no, I am really gonna miss you,” she repeats on ‘Splendour’, casually, as if the realization hasn’t quite struck her yet. But give it time, and it might deepen into a strange kind of nostalgia.