Binker & Moses, the free jazz duo of Moses Boyd and Binker Golding, have announced a new album titled Feeding The Machine. The follow-up to 2017’s Journey to the Mountain of Forever is due out February 25 via Gearbox Records. Along with the announcement, they’ve shared the new single ‘Accelerometer Overdose’. Check it out and find the album cover and tracklist below.

Feeding The Machine was recorded at Peter Gabriel’s Real World Studios by producer Hugh Padgham and features Max Luthert on tape loops and electronics. Talking about the new material, Moses Boyd said in a press release:

I feel myself and Binker have been wanting to create this album for some years. The timing was never right, and I also feel we needed some more experience under our belt to attempt a record like this. We knew we wanted it to be different from all our previous material. Each Binker and Moses record has a strong identity and we wanted to maintain that whilst contributing something new that excites us both.

When the opportunity came up to record it was quite last minute. We had no material planned but just a concept. Really, we took a huge leap of faith and went in the studio empty-handed. The only concept I had was this idea of feeding our improvisation through these different machines / configurations in the studio. We enlisted our long-time friend and collaborator Max Luthert on tape loops and modular synths to achieve this.

This album is less about the forms and melodies but more about pushing ourselves creatively within a different way of working. I feel we achieved something special which I’m very proud of.

Binker Golding added: “I think the album for the most part has a really lonely feel. It’s the loneliest of the Binker & Moses albums, despite the dance tracks and I quite like that about it. It marks it out as different. Moses and I wanted to expand the sound of the band, but without adding more instrumentalists as we had on previous albums. In order to expand the sound of the saxophone and drums, we decided to ask Max Luthert to assist us on modular. Most of what you hear coming from the modular is actually a re-ordering of acoustic sax and drums. The only thing is it’s so distorted, that you wouldn’t recognise the acoustic sounds.” 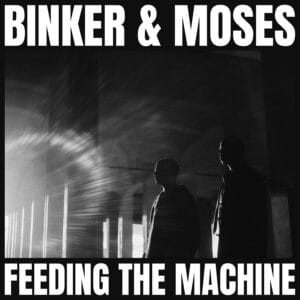 1. Asynchronous Intervals
2. Active-Multiple-Fetish-Overlord
3. Accelerometer Overdose
4. Feed Infinite
5. After The Machine Settles
6. Because Because