The Rolling Loud Miami fest will take place at Hard Rock Stadium in Miami Gardens on July 22-24. Travis Scott, A$AP Rocky, and Post Malone headlined last year’s edition, which ended on a controversial note when DaBaby made homophobic comments toward people with HIV and AIDS during his set. DaBaby was one of the guests on Ye’s 2021 album Donda; its recently unveiled follow-up, Donda 2, was executive produced by Future. 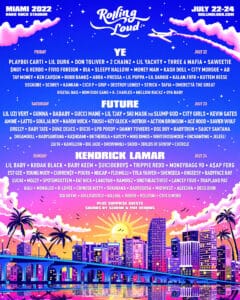