Glastonbury has revealed the initial lineup for its 2022 edition. Billie Eilish, Paul McCartney, Kendrick Lamar, and Diana Ross are set to headline the festival, which takes place June 22-26 at Worthy Farm in Pilton, Somerset, UK.

Both Kendrick and McCartney were set to headline Glastonbury 2020, which was canceled due to the pandemic. Taylor Swift is the only artist slated to headline in 2020 not announced for this year’s sold-out festival. Many more acts will be revealed over the coming months, with the full lineup confirmed in May. 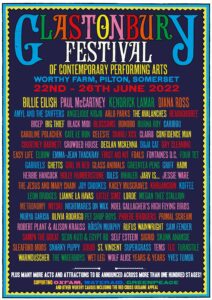