The royal guard pops the button of his black trousers and unzips his fly. His white-gloved hands thumb through the waistband of his white underwear. The silk-like material of his gloves caresses his skin just above the band, feeding the lust within him as he watches himself. He fishes out his phone from his front pocket and opens his camera. Still in his uniform and hat, the royal guard peeks through his underwear and takes a picture of his arousal, unabashed to whoever catches him at his voyeurism. Such intimacy laced with vulnerability in this artwork titled Your Royal Highness and His Prince may hint at the themes Ron Mariñas paints on his canvas, but the Filipino artist merely scratches the surface.

Mariñas tells Our Culture that his artworks reflect some personal stories that belong in a diary. “My concepts come from my experiences and perspectives in life, as well as from the people that I am acquainted well with,” he explains. Rather than letting the words remain inscribed on paper, he transforms these texts into vivid images, oftentimes underlined by the stark gold background. “My art style can be described as breaking the norms of what the old society has set. As an artist, I continue to free myself and others through combining different bold elements and breaking the old idea of how things should be,” he says.

Since childhood, Mariñas has always had a passion for arts and knew that he would not last long in an office or the corporate world. He took the artistic route and studied arts, a deviation from his family of engineers and architects. He toyed with the liberty the arts field offered him until he grounded his art style, which he deemed as a staple in the industry. “Having a signature style is an important element in the arts. I remember experiencing so much pressure early in my career. In this business, people will try hard to control and shape you to fit their standards, but I just rebelled and stood up for myself, choosing a style that fits my personality. I have always been so passionate about classical and modern arts and always combine both elements into my style while adding a touch of timelessness in the ideas that I infuse,” he shares.

A tinge of modern masculinity that winks at sensitivity, fragility, and fondness over fashion brands, luxury, and Greek statues philosophises his artworks. When asked about his view on masculinity, the artist pivots back to his experiences. “As an art student, I grew up in an environment where toxic masculinity was absent, and that made me realise, as a teenager back then, how society limits the definition of what masculinity is. All humans have a sense of sensitivity, fragility, femininity, and masculinity in them. For me, that is what masculinity is: being able to show real emotions without hesitations of what and how a man should be. It is about being able to express yourself in your truest form.”

No longer just spoken words, Mariñas showcases these beliefs through his paintings. In The False Reputation, the first man dies in the arms of the second man from the volley of paintbrushes that pierced his body. The second man bends his knees to receive the weight of the lifeless body and places his hand on the dead man’s chest, trying to stop the gush of blood. Sorrow and pain cross the second man’s face. “This work is a representation of a person holding his own body, a symbol of his reputation. It emphasises the whole story of being centered by undeserving hate and false accusations. Meanwhile, the brushes that impaled the man represent the made-up stories told by other artists. Then, in the study of arts and symbols, a key is the representation of truth. Three keys are shown being held by the second man which symbolises the people who know the real reputation and the story of the subject,” says Mariñas.

The marriage of sensitivity and fragility may overflow, so much that it translates into obsession, a feature that characterises The Circle of a Sightless Romance. The naked man and woman share their fondness over the single rose before them, a string that ties them both in their toxic relationship. The painting may not exude the subtle violence that explicitly comes up in the realm of obsession, but it brews beneath the surface, a takeaway even from the blindfold that covers the eyes – a symbol of consciousness – of the man. 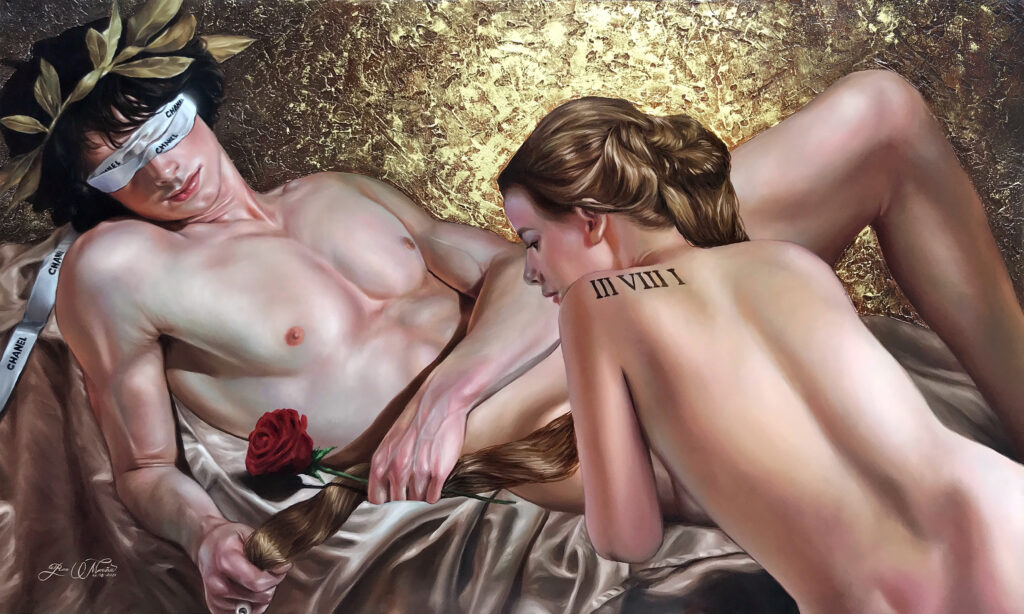 “In every relationship, both people are in love, but there are times where they love each other differently,” Mariñas tells Our Culture. “And that difference does not mean it is ugly. It simply means that they are two different people who share the same thing which is the eternal love that ignites the fire between them. In this concept, the eyeball on his hand is a representation of ‘seeing things based on an action’ which, in this setting, is an after-sex scene. That means he is more likely to see love when they are being intimate. Holding a piece of her is a symbol of ownership to one another.”

Symbolisms mark the paintings of Mariñas. As he continues to narrate the backstory of the painting above: “The two subjects are obsessively in love judging by the symbols in them. A man holding a red rose stands as a portrayal of love and affection while the woman with ‘three words, eight letters, and one meaning’ tattoo on her back metaphorically describes the endless cycle of true love that knows no bounds.”

Mariñas’ attitude towards his art cleanses the texts in his diary to manifest them into tangible imagery, adding drops of sagacity, sensitivity, and sensuality to produce a cure-all body of work. “An artist’s job is to send a message through the form of art, and for me, it is a big responsibility. We were given a powerful opportunity to send a message and leave an impact that could possibly last a century. That is why it is important for me to produce an artwork that is timeless when it comes to its art movement. I believe that our paintings will be our biggest legacy, and that helps me to create not just beautiful pieces but to make every project meaningful even for generations to come. So, I treat every work in progress paintings like it’s my last.” Knowing the sources and influences, he draws from, every last panting of Ron Mariñas will surely not be his last.