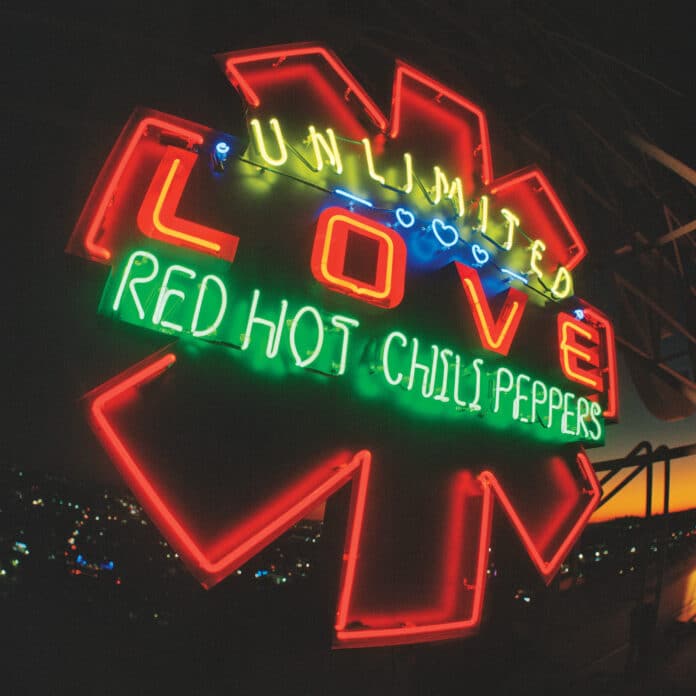 For a band whose main appeal is that they seem to endlessly be goofing around, the Red Hot Chili Peppers can be pretty sincere. When they announced their twelfth studio album, Unlimited Love, their press photo drew comparisons to the notoriously earnest indie band Big Thief, and their joint statement made it clear the album title isn’t meant to be cheekily self-aware but a true reflection of their creative ambitions, which they’ve worked towards partly by spending countless hours honing their craft and partly by having their “antennae attuned to the divine cosmos.” Most of all, though, they emphasized the strength of their collective bond, which makes sense when you’re promoting what is essentially a reunion album. None of this suggests that the Chili Peppers have changed in any significant way, only that they’ve gotten closer to who they’ve always wanted to be. Listening to Unlimited Love – which is loaded with 17 songs that clock in at over 70 minutes – you don’t doubt that for a second.

It’s undeniably the safest and most nostalgic route they could have taken, but for most fans, it’s also potentially the most rewarding. It’s the Red Hot Chili Peppers’ first album in six years and their first with guitarist John Frusciante back in the lineup since 2006’s Stadium Arcadium, so it really wasn’t a question of whether they would shift their sonic identity but to what extent Frusciante’s return could help revitalize their sound, as it has done in the past. This narrative is usually centered around Frusciante’s melodic sensibilities and his knack for inventive arrangements – he’s spent the past decade making mostly left-field electronic experiments. But while there are moments on Unlimited Love that likely benefit from Frusciante’s out-of-the-box thinking – and his guitar solos certainly never disappoint – what’s most promising is his ability to bring out the heart in the band’s songs, a reminder that what propelled them to alt-rock superstardom in the first place wasn’t the cartoonish perversity of Anthony Kiedis’ lyrics but the veiled sense of melancholy that began to lurk beneath the surface.

I grew up loving this band’s songs because pretty much everyone could vibe with how fun and ridiculous they were and no one had to say a thing about how emotional they could be at their best. (As with Kiedis’ jokes, we often had no idea what those emotions were about – which of course was part of why they resonated.) If the title leads you to believe that there’s a sentimentality to Unlimited Love, it has little to do with the music itself. The album nails that classic Red Hot Chili Peppers aesthetic, but it simply doesn’t have enough memorable songs that I can see becoming classics in their catalog. There are songs that are catchy and may grow on you over time, but the group doesn’t seem to be making an effort to recapture that old magic as much as they hang around hoping it just happens.

Even if it lacks that signature immediacy, the record still has heart, and it lies almost purely in the band’s playing. Unlimited Love is also significant because it finds them reuniting with Rick Rubin, who had produced every Chili Peppers album since Blood Sugar Sex Magik with the exception of 2016’s The Getaway, and the clarity of the production allows the playful chemistry between the four members to really shine through. There’s something refreshing about hearing the band working in this mode, exhibiting a kind of looseness that leads to some of the album’s most exciting moments – from the infectious funkiness of ‘She’s a Lover’ to the surprisingly distorted breakdown of ‘Bastards of Light’.

There’s as much of a point poking fun at Kiedis’ most embarrassing lyrics on the record as there is picking out Flea’s bounciest bass lines – by now, you know what the recipe looks like. (That said, the impressively awkward rhymes on ‘Poster Child’ warrant a mention, and ‘One Way Traffic’ slaps.) The only reason I’ll bring up Kiedis’ Irish pirate accent on lead single ‘Black Summer’ is that it’s a prime example of how any time the band tries to address a serious topic (in this case, climate change), some other part of the mix stands in the way. Of course, if you’re looking to the Red Hot Chili Peppers for social commentary in 2022, you’re looking in the wrong place.

Although there’s not much of a unifying thread between the songs, Unlimited Love is most enjoyable for its overall freewheeling energy rather than any individual songs. It also doesn’t revive any particular sound from the band’s history – ‘Black Summer’ points in the direction of Californication, but there are echoes of By the Way and Stadium Arcadium, too, even though the approach is generally less adventurous. If, like me, you have a fondness for the mellower, broader stylings of By the Way, it’s two tracks towards the end of the album – ‘Veronica’ and ‘The Heavy Wing’ – that will stand out. When Frusciante takes lead vocals on the latter, it’s such a sublime, heartfelt moment that despite its almost six-minute runtime, time seems to fly by: so much has changed, yet so little.