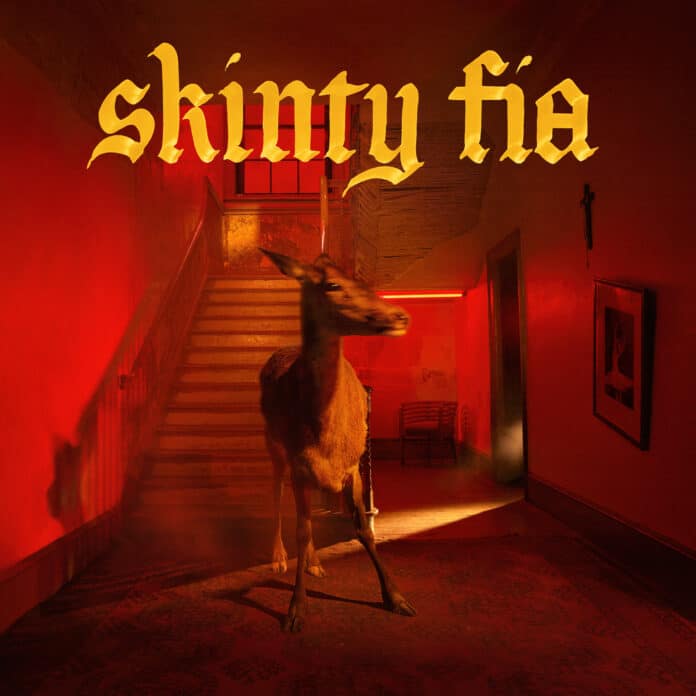 It doesn’t matter whether they call you a pop singer, an avant-garde polymath, or, god forbid, a post-punk band, nothing will bring you more acclaim than knowing your way around a melody. For Fontaines D.C., catchiness is often a form of subversion – take the title track from their sophomore LP, 2020’s A Hero’s Death, which is as sprightly as it is unnerving. On that album, the band managed to retain some of the raw, driving energy of their debut Dogrel while adding in more space and deepening their sound to fit its relentlessly brooding atmosphere. With their latest effort, Skinty Fia – an Irish expletive that translates to “the damnation of the deer” – the band takes this approach to the next level. The mood is more solemn and gothic than before, reaching for a pervasive melancholy where others might react with aggression – but it also embraces their melodic sensibilities in ways that were only hinted at by its predecessor, matching the maturity and nuance that has slowly seeped into the band’s music with a penchant for simplicity.

Crafting a good hook is different from knowing your way around it, which is what makes so many of the tracks on Skinty Fia so hypnotically engaging. A lot of it has to do with how Grian Chatten leans into certain syllables, something that’s always been a distinct part of his delivery but is more pronounced here than ever – hear the way he alternates between “I’ve been leaving it all/ I’ve been living it all” on ‘Big Shot’, not so much stressing the difference between the two as giving both statements equal weight, even if their meaning remains unclear. From a less experienced band, this might have come off as a tacky lyric, but Chatten’s captivating vocal presence, combined with the creeping undercurrent of the instrumental, renders it compelling. There’s a similar thing happening on ‘Roman Holiday’, a song about exploring London as an Irish ex-pat that sets reverberating guitars against syncopated drums: “Baby come on, get stoned, get stoned/ Get inside it, inside it, inside it, inside/ Get along, get along, get alone, get alone,” Chatten sings, and immediately the thrill of togetherness blurs into a strange shade of alienation. And then, on ‘How Cold Love Is’, the repetition of the title again has a numbing effect, which suits the song’s dreary psychedelia.

The album’s early singles stand out as some of its most infectious tracks, but hearing them in the context of the record highlights their emotional depth. ‘Jackie Down the Line’ presents an intimately detailed character study while contrasting a two-chord progression with some of the band’s most expansive production to date, which only accentuates the violent despondency of the lyrics. When Skinty Fia expresses a more overtly political character, it does so through a uniquely personal lens that feels all the more sincere – it’s a record about seeing the flawed nature of the things you love, where one’s fractured relationship with home, the self, and other people are all filtered through the same language. ‘I Love You’ is the purest distillation of these ideas, and as the penultimate track, it unearths the conflicts that have so far been observed with a cold distance. Even as it avoids any kind of resolution, it stands as the album’s most impactful song.

Some of the main takeaways from Skinty Fia might seem too predictable. Compared to A Hero’s Death, the band’s experimental tendencies, most evident in the industrial noise of the title track, seem more thoughtful and considered. As their third LP, it’s almost expected that it would draw a line from the romance and poetry of Dogrel to the dark surrealism of A Hero’s Death. Yet this evolution does nothing to detract from the band’s authenticity. If anything, this is an album that reflects the group’s present worlview without mythogogizing their rise to success in the way that its predecessor did. It’s elusive yet direct, bold yet understated. It takes its time; that old nervous urgency is still there, but they achieve more when they decide to pull back. ‘The Couple Across the Way’ is backed by a lone accordion as Chatten relays the arguments of a neighbouring couple, but as much as he removes himself from the picture, the song’s vulnerability speaks volumes. “The world has changed beyond our doorstep/ People talk and dress so strange,” he sings at one point. On Skinty Fia, that kind of strangeness is ever-present – and yet, with each weary, careful step, Fontaines D.C. make it feel familiar.

Album Review: Fontaines D.C., 'Skinty Fia'It doesn’t matter whether they call you a pop singer, an avant-garde polymath, or, god forbid, a post-punk band, nothing will bring you more acclaim than knowing your way around a melody. For Fontaines D.C., catchiness is often a form of subversion – take...