Album Review: Regina Spektor, ‘Home, before and after’ 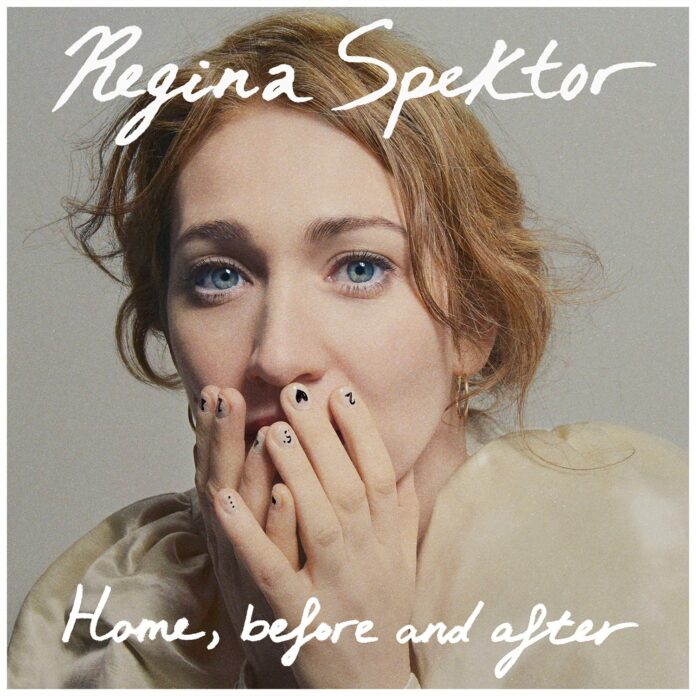 “Why doesn’t it get better with time?” Regina Spektor ponders on the opening track of her new album, Home, before and after. It’s a question we all ask ourselves sometimes. The Russian-born, New York-based singer-songwriter, however, is addressing none other than God – and, at least in this imaginative scenario, not in a strictly metaphorical sense (they’re having a beer). Even Spektor’s signature wit (“We didn’t even have to pay/ ‘Cause God is God, and he’s revered”) and theatrical flair aren’t enough to mask the loftiness of that question, which becomes weightier still when you consider two important facts: this is the musician’s first album in six years, and the song itself dates back to the early 2010s, when Spektor first debuted it live. I never got to witness it in that context, but I can only imagine hearing those same words nearly a decade later: Why doesn’t it get better with time?

The song is called ‘Becoming All Alone’, and despite the flashy production choices that mark the studio version, its raw melancholy is hard to ignore. In fact, the decision to make it dramatic as possible, adorning it with luxurious strings and even providing a sturdy drum beat, almost has the effect of underscoring the heart-wrenching loneliness at its core. God may be revered, but he soon becomes irrelevant: the narrator is alone with her thoughts, embittered, and the second time around not even He seems to respond to her call. The arrangement wants to trick you into thinking this is an elaborate stage production, but it’s clearly a one-woman show – and a powerful way to kick off the album.

Spektor’s 2017 effort, Remember Us to Life, was one of her most poignant and compelling, spanning intimate piano ballads and lusciously orchestrated pop while maintaining an unusually somber attitude. On its follow-up, co-produced with John Congleton, Spektor continues to strike a balance between ambitious, expansive (and expensive-sounding) production and playful, earnest songwriting. Although the results aren’t always as memorable, the album is not only more tonally consistent – despite the deliberate contrasts that arise, like the one on ‘Becoming All Alone’ – but also refreshingly daring. Spektor is known for her vivid storytelling, but ‘Up the Mountain’ manages to be engrossing with very little narrative and a lot more drum programming than you’d expect. Meanwhile, ‘One Man’s Prayer’ and ‘Sugar Man’ could have easily been examples of Spektor’s sympathy being stretched too far (depicting the titular men in an all too positive light), but by trading the bombast of other songs for a more unassuming kind of pop, she highlights the sardonic nature of her lyrics.

Though it never falls flat, there are moments on Home, before and after that don’t quite have the same impact. ‘What Might Have Been’ uses a series of contradictions to hint at a story of lost love, but ends way before it has the chance to become fully-realized. That theme is more effectively explored on ‘Raindrops’, a more straightforward Regina Spektor song that, along with ‘Loveology’, has been in search of a home since her early career. Both fit neatly into this collection, whose most endearing quality might be its penchant for the absurd – as sincere and heartfelt as her songwriting can be, Spektor appears so self-conscious about embracing any universal philosophy that when she concludes that “Love is enough of a reason to stay” on ‘Coin’, the next song must arm itself with an accusation: “Oh, an incurable humanist you are.”

The singer’s preoccupation with time and its unpredictability doesn’t go away, though. She lets it all unfurl on ‘Spacetime Fairytale’, a nine-minute odyssey that gains mass and changes direction but never helps her escape what she already knows to be true: that’s there’s “no such thing as time,” “no such thing as mine.” Its own portentousness grows comically haunting, the framing less cosmic than purely personal, an attempt to see the world – and her contribution to it – as being defined by change rather than stasis, relationships rather than transactions. “I tend to live in a world of miniatures, so even my biggest work feels like a blink to me,” Spektor said in a recent interview. “It’s just a tiny little thing that comes and goes and floats away.” On ‘Spacetime Fairytale’, she acknowledges, “Some days it’s yours, some days it’s mine/ Some days it’s cruel, some days it’s kind.” Does it get better? Well, maybe. “It just can’t stay the same.”