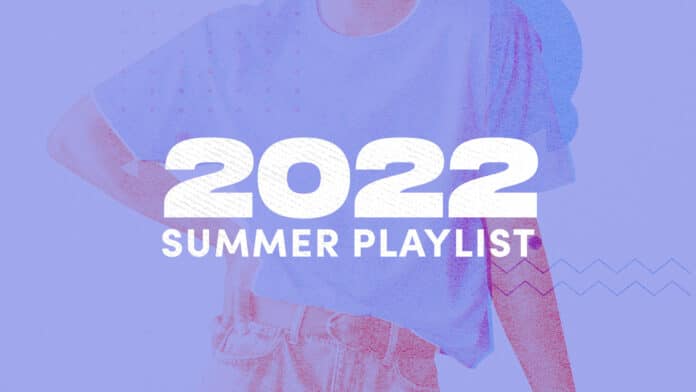 The debate over “Song of the Summer” is often contested — will it be a highly popular singer’s release that seems geared for maximum playtime, or a newcomer with a breakout hit? Summer energy can be lazy, frantic, or a mix between the two, making the search especially hard. To try and narrow it down, Our Culture has compiled a 15-track list to accompany your summer.

‘Sacrifice’ by The Weeknd

The Weeknd’s 2022 album Dawn FM posited himself as the king of the underworld, but that doesn’t mean Hell is without its jams. Piggybacking off the success of ‘80’s-tinted After Hours, songs like ‘Sacrifice’ and ‘Take My Breath’ dip their toes into the throwback production style of the era, without ever being overpowering, as ‘Blinding Lights’ sometimes tended to be. The bassline is killer, the outro is catchy, and ‘Sacrifice’ not being as big of a hit as ‘Blinding Lights’ will forever be a mystery.

‘BREAK MY SOUL’ by Beyoncé

It’s no ‘FORMATION’, but Beyoncé’s six-year comeback single ‘BREAK MY SOUL’ is a grower in its own right. Assisted by Big Freedia, the queen of bounce, shouting the affirmation-like “Release the stress/ Release the love, forgive the rest,” and a well-used Robin S. sample, ‘BREAK MY SOUL’ is a rallying cry suited for a period of time that is working very hard to break our souls. Though Queen B, one of the richest humans on the planet, singing about working a nine-to-five is pretty funny, her writing is inspirational and deceptively simple. “I’m taking my new foundation/ And I’ma build my own motivation,” she sings, eventually incorporating an angelic choir into her performance. Her upcoming RENAISSANCE is said to be a dancefloor-filler album, and ‘BREAK MY SOUL’ is just one taste of the hits yet to come.

Ravyn Lenae’s futuristic R&B debut Hypnos entrances all the way through, but the standout track is ‘Venom’, an upbeat and glitchy track. Though the lyrics are descriptive of a sort of femme fatale killer (“Go get ’em, fake killer / Don’t tell ’em, straight venom”), the playfulness of the track makes it insanely catchy. Her sweet and high voice is used exceptionally well, pulling the listener in before the dopamine hit of the chorus.

‘The Path’ by Lorde

Released at the tail end of summer last year, ‘The Path’ certainly didn’t get the recognition it deserves. Based on just vocal performance and instrumentation, it’s one of Lorde’s best works to date — the serene singing of “Let’s hope the sun will show us the path” in the last half is almost a summer blessing. The lyrics sometimes dip into 2013 Lorde, starting the song off with “Caught in the complex divorce of the seasons,” when she’s probably just talking about the month of June, but any discrepancies are forgivable in the track as a whole. A perfect album opener, it sets the tone for Solar Power immediately and concisely.

‘The Big Sky’ by Kate Bush

‘Running Up That Hill (A Deal With God)’ might be the Kate Bush song that’s having a summer resurgence, but I’d throw ‘The Big Sky’ from the same album, Hounds of Love, in the running. ‘The Big Sky’ is huge and jubilant, Bush entranced by our cosmos and place on the earth, mesmerized by something as simple as a slate of blue we see everyday (“What was the question?/ I was looking at the big sky,” she sings, distractedly). The pulsating beat builds momentum as it becomes the pinnacle of an 80’s feel-good jam, complete with a choir. Whether listening while laying down cloud gazing or walking around, her approach to nature will likely change yours as well.

YUKIKA’s first solo 2022 release glides effortlessly into her catalog of dazzling pop gems, keeping with the city pop trend she cultivated on 2020’s standout SOUL LADY. Complemented with a saxophone, an electric guitar, and YUKIKA’s impossibly light voice, “Scent” is perfect for either a high-energy workout song or simply lazing around. The song comes after her recent engagement announcement, which makes her lyrics of “When I touch you I feel like I’m holding you tight/ I keep shaking, I’m cutting it close/ When you touch my scent that flows backward/ I’ll flinch and find you” all the more sweeter.

Clunky song title be damned, ‘Want Want’ by Maggie Rogers is a perfect encapsulation of summer’s freedom. From the roaring bassline to the lyrics stemming from desire and need, it’s easy to memorize and easier to sing along to. Rogers has crafted a grittier, rough-around-the-edges approach to pop, but the her emotional sensibility offrom her debut is still in play here. “Can’t hide what you desire, once you own it / Can’t fake what you can’t break up with,” she sings. This, plus lead single ‘That’s Where I Am’ suggest an immensely successful sophomore effort in her upcoming Surrender.

‘It was me’ by Yerin Baek

Zaps of electricity spark in “It was me,” Yerin Baek’s first release since her 2021 covers EP. Her voice sounds like a lullaby, pulling in new melodies and styles that make her work so dynamic and flexible. 2019’s personal Every letter i sent you. and 2020’s electronic tellusaboutyourself are melded perfectly here, creating a lulling and exciting tune. “What made me disappear/ What made me shine/ It was me,” she sings, a telling sign her upcoming work will be filled with even more self-reflection.

‘This Hell’ by Rina Sawayama

Whether it’s the allusions to the heat of hell, Rina Sawayama’s tongue-in-cheek writing about homophobic protestors, or the killer electric guitar bridge, ‘This Hell’ is a perfect way to kickstart Sawayama’s Hold the Girl era. It combines the detailed and personal writing about being a queer woman (“Got my invitation / To eternal damnation,” she teases) and the eclectic yet precise production that her debut, SAWAYAMA, was lauded for. The disparity between this song and her next release ‘Catch Me In The Air’, never jarring, makes Hold the Girl a highly anticipated release.

‘Eye in the Wall’ by Perfume Genius

Perfume Genius’ recent Ugly Season was filled with avante-garde baroque pop, but one of the most successful songs came in the form of ‘Eye In the Wall’, a sprawling, cosmic journey. Starting slow, it quickly expands into a frantic, pulsating energy, with Mike Hadreas singing, “Wild and free, your body onscreen/ I’m full of feeling/ I’m full of nothing but love.” The hazy momentum keeps up in the entire song, evoking images like rolling through the Californian desert on the way to Coachella.

Carly Rae Jepsen is known for her big, unabashed pop bangers (‘Run Away With Me’, ‘Now That I Found You’, ‘Want You in My Room’) but on her first solo release this year, ‘Western Wind’ kicks back and relaxes. Taking a hint from Lorde’s Solar Power of last year, Jepsen’s new era is nature-focused, grounded, and bathed in atmosphere. It’s a perfect song just to chill to, and Jepsen seems as relaxed as ever when she sings, “Coming in like a western wind/ Do you feel home from all directions?”

Janky Star is a perfect name for Grace Ives’ sophomore album, a record that combines intimate and diary-like writing with eclectic, home-bound production. Quiet rasps of falling on the floor, doing splits, admiring a diner worker fill the album, but she flexes her vocal muscles on this song, singing “I’ve been loose/ Every night.” She has the power to pull focus, yet filling whole songs with it might be overpowering. Smartly, she leaves the verses for her quirky and relatable anecdotal writing, and fills in the choruses with her bold voice. It’s alright not to be perfect, and Ives’ music is the jolt of life-affirming sound we need.

Angèle’s ‘Libre’, filled with vocal chops and a groovy, bouncy beat, is an ode to freedom in a studded pop package. Owing it to herself to live as freely as she can, she playfully teases on the chorus: “Living free/ Believe me, it will change/ I stayed standing and I came to like it.” The song has an airiness, assisted by her dynamic voice, and it’s worth mentioning that in the dream-like music video, she becomes an astronaut jumping around the streets of a city. If you’re not spending the summer like her, what are you even doing?

‘What I Want’ by MUNA

“When I go out again/ I’m gonna drink a lot/ I’m gonna take a shot,” lead singer of MUNA Katie Gavin asserts at the beginning of this track. The band’s new self-titled album is all about listening to your body and prioritizing yourself, and nowhere is it more apparent on this pulse-pounding song. “I’ve spent too many years not knowing what/ What I wanted, how to get it,” she sings, and now, it’s time to make up for lost time. Whether it’s because of the pandemic, or a kind of queer second adolescence MUNA is filled with, “What I Want” is an ode to pleasure, casting thoughts of self-doubt aside.

Gone are the sharp, angular and anxiety-provoking strings of 2019’s All Mirrors — Angel Olsen wants to sing about love on her latest release, Big Time. Her lyricism accompanied by a new twang paints the picture of a perfect summer day: “We’re always busy, baby, not this time/ Lay in the tall grass, talking with your eyes.” She repeats, “I’m lovin’ you big time, I’m lovin’ you more,” filling the song with a sweet sincerity.

Listen to the full 2022 Summer Playlist, featuring a few additional picks, on Spotify.