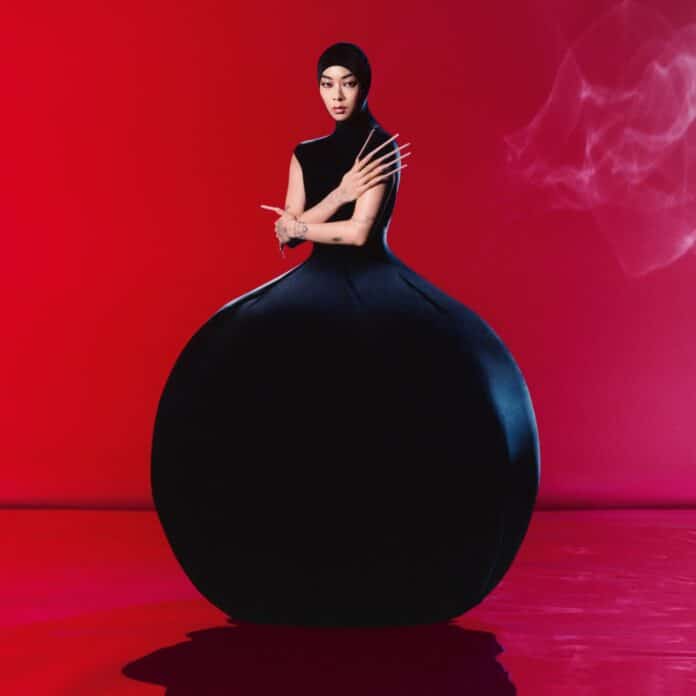 Artists have always used music as an outlet for repressed feelings, which means they often don’t come to light until long after you’ve put pen to paper. Rina Sawayama, though, clearly understands the value of studying your own emotions. As she did on her riveting 2020 debut, the pop singer continues to wear her wildly eclectic influences on her sleeve, but she admits that Hold the Girl‘s biggest inspiration was therapy – and the album goes as far as to reflect her effort to “reparent” herself. So even as her music still revels in huge choruses that channel childhood trauma, rage, and guilt in uncompromising fashion, the perspective of her songwriting has evidently shifted, becoming more measured without shedding off too much weight. It scans as the work of a musician who has done the underlying work and is both careful and playful in bringing it to the surface, finding as much power in vulnerability as in the broad universality of pop.

Just about every aspect of Hold the Girl feels more purposeful than SAWAYAMA. That album’s fusion of Y2K pop and nu-metal was deliberately messy and bombastic, but it barely held itself together; Hold the Girl draws from an even wider array of styles but appears more cohesive by keeping a solid framing. Its shapeshifting pop presents healing as the turbulent but rewarding process of holding on and letting go, of cultivating empathy for those who have caused you pain and showing up for the people who matter – including one’s own self. If that all sounds a bit generic, that’s because it is – and it can feel frustrating, but Sawayama is usually self-aware enough to make it land. She proves early on that she can balance weighty concepts with over-the-top theatricality, as ‘Minor Feelings’ – which takes its title from the poet Cathy Park Hong’s collection of essays of the same name – offers a nuanced exploration of the collective feelings of marginalization Asian Americans harbour as a result of systemic racism. Though she doesn’t disregard their sociopolitical origins, the singer makes a point of embracing excess as a liberatory response to all kinds of repression – even if it occasionally leads to clunky lines about being “busy cleansing my soul.”

Because of the scope of Sawayama’s ambition, it’s easier to gauge Hold the Girl‘s impact on a song-by-song basis. But as with her debut, her ability to succeed in more than one lane is a testament to her versatility. ‘This Hell’ may sound less urgent than the similarly luxurious and cheeky SAWAYAMA single ‘XS’, but the country-inspired tune is at least catchy and well-executed enough to sell you on the path to “eternal damnation.” Hold the Girl comes closest to being devilishly fun when it sticks to a single idea, even if that means using Frankenstein’s monster as an obvious yet effective metaphor. And while it doesn’t quite share SAWAYAMA‘s rebellious spirit, it can be exhilarating to hear her swerve between sounds with the same voraciousness, from the ominous Eurodance track ‘Holy (Til You Let Me Go)’ to the bustling two-step garage of ‘Imagining’.

But try to take in it as a whole, and much of Hold the Girl starts to come off as shallow and tedious, even if it never veers into unpleasant territory. There’s nothing inherently wrong with its earnest approach to lyricism – that kind of sincerity gave us SAWAYAMA’s most enduring ballad, ‘Chosen Family’ – but the album packs so many sentimental ballads that if you can separate the good (‘Forgiveness’) from the bad (‘Phantom’), you still might not be able to remember much from either camp. But that might have less to do with weak songwriting than another one of Hold the Girl‘s problems, which is that it suffers from overproduction. When you’re not baffled by genre experiments like ‘Your Age’ (Sawayama’s most cloying attempt at evoking Linkin Park’s glory days), you’re left with songs that prioritize extravagant production over the strength of Sawayama’s vision, her technical skills over her emotional range, and sweeping, ambiguous gestures over meaningful ones.

Hold the Girl might have fared better with a tighter tracklist, but its taste for the saccharine is put to good use as the album draws to a close. Awkwardly sandwiched between ‘Phantom’ are two of Sawayama’s most poignant songs, driving home the record’s overarching message of triumph over hardship. ‘Send My Love to John’ is unlike any other song on the album, a subdued acoustic ballad sung from the perspective of an immigrant mother who begins to acknowledge her son’s queerness. ‘To Be Alive’, by contrast, is the opposite of subtle, anchoring in a pulsating beat, plenty of lyrical cliches, and a soaring chorus that seeks acceptance from within. Even though its hopeful sentiment has been expressed time again and again – in Hold the Girl and pop music at large – the reason it still makes for an exuberant conclusion is pointedly simple: “Feels like the first time.”

Album Review: Rina Sawayama, 'Hold the Girl'Artists have always used music as an outlet for repressed feelings, which means they often don't come to light until long after you've put pen to paper. Rina Sawayama, though, clearly understands the value of studying your own emotions. As she did on her...