Death Valley Girls have announced their next album, Islands in the Sky, which drops on February 24 via Suicide Squeeze Records. Today’s announcement is accompanied by the release of lead single ‘What Are The Odds’, alongside a music video. Check it out below and scroll down for the LP’s cover art and tracklist.

Talking about the new song, the band’s Bonnie Bloomgarden said in a statement: “When we wrote ‘I’m a Man Too’ we were trying to revisit No Doubt’s ‘I’m Just a Girl’ but through a new lens. ‘What Are the Odds’ is in the same way an investigation /revisitation of Madonna’s ‘Material Girl’ but with a DVG spin. We love to think about consciousness, and existence, and we very much believe in some type of reincarnation, but also that this experience isn’t linear, there isn’t a past and future, there’s something else going on! What is it? Is it a simulation, are we simulated girls??!”

While working on the follow-up to 2020’s Under the Spell of Joy, Bloomgarden found herself bedridden with a mysterious illness between November 2020 and March 2021. “When I was sick I had to sleep most of the day. I kept waking up every few hours with an intense message to take care of the island, feed the island… I have no idea why, but making music for the island kept coming up,” she explained, continuing:

When I was sick I started to wonder if it would be possible to write a record with messages of love to my future self. This was really the first time that I consciously thought about my own suffering and what future me might need to hear to heal. I struggled so much in my life with mental health, abuse, PTSD, and feeling like I didn’t belong anywhere. And I don’t want anyone—including my future self—to suffer ever again. I realized that if we are all part of one cosmic consciousness, as we [Death Valley Girls] believe, then Islands in the Sky could serve not only as a message of love and acceptance to myself, but also from every self to every self, because we are all one!

Islands in the Sky will include the previously released single ‘It’s All Really Kind of Amazing’.

Islands in the Sky Cover Artwork: 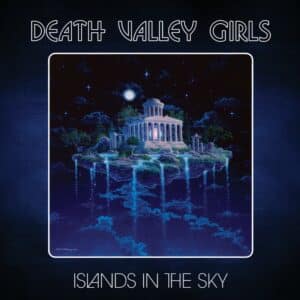 Islands in the Sky Tracklist: