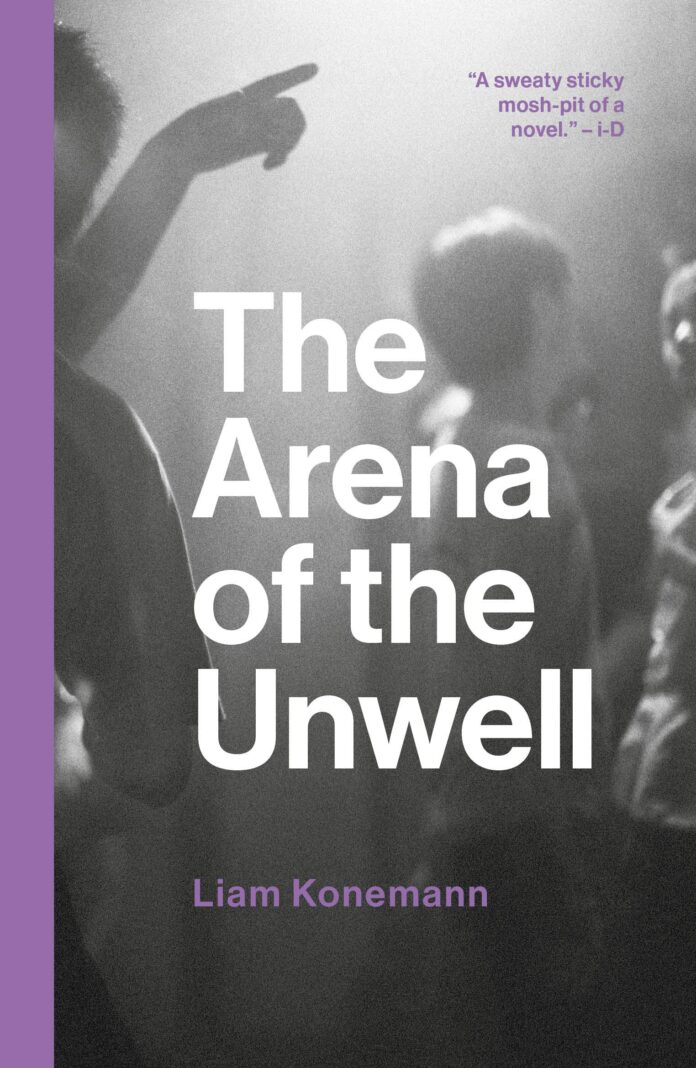 If you were into indie music in the 2010s, The Arena of the Unwell will feel familiar. Even if you weren’t, after reading this book you’ll feel like you were there. Following twenty-two-year-old Noah as he bounces between gigs and his job at a record store, The Arena is an innovative and timely exploration of the intersections of mental health, queerness, and coming-of-age, viewed through the lens of the indie music scene.

Noah is closely following the revival of his favourite band, Smiling Politely. After a comeback concert turns violent, he runs into barman Dylan, who he has been crushing on from afar, and photographer Fraser, who comes with Dylan everywhere. As his mental health spirals Noah is drawn closer to Dylan and Fraser’s complex relationship, and drifts further from his own best friends — Mairead and Jenny. All the while, his NHS therapy hours are dwindling, and his job is becoming increasingly precarious.

Konemann is a music journalist, and his ability to write so vividly about music elevates The Arena, creating a powerful sense of the London indie music scene in this era. “It was just such a rich environment for stories and for interpersonal relationships because it is quite charged a lot of the time,” he explained to Lighthouse Books. Konemann captures that intensity brilliantly; at times I felt like I was still peeling the grime of last night’s gig off my skin. Importantly, Konemann refuses to depict the scene as solely one thing or another. The Arena highlights the toxicity of some parts of the indie scene, shedding light on substance abuse and artist mental health issues, while still evoking the close community some people find in music scenes. The novel reminds us of the sense of renewal in hearing songs that resonate and the thrill of live music. For Noah, the songs of Smiling Politely feel like they were written for him, as do songs by the few indie singers who are queer.

The Arena confronts challenging themes around mental health, following in the footsteps of authors like Candice Carty-Williams who have been placing mental health centre-stage in their work. Konemann highlights both that Noah deserves better and faces vast – but usual – barriers to getting into a better place, while still emphasising that he is not a perfect person. In the indie music scene, this mental health theme interlinks with that of drug and alcohol abuse, which is a key part of how Noah sometimes deals with his problems.

Noah sometimes attends NHS therapy and struggles to navigate the system, particularly as a queer person. Although the expense of private therapy and the intensity of demand for NHS services does colour the backdrop of the book, Konemann could afford to push further here; the passages about therapy feel faint in contrast to his descriptions of live gigs. Nonetheless, he deserves credit for probing sensitively into such a complex subject.

All this makes The Arena sound quite dark, but, despite some of the subject matter, it is often very funny. Konemann deftly balances serious engagement with difficult subjects with self-aware humour, creating a narrative voice that will be very recognizable to many members of Gen Z. He is unafraid to write those things that lots of us think but might not often admit to aloud.

Konemann is part of a generation of writers exploring queer experiences from new angles, such as Sarah Thankam Matthews and David Santos Donaldson. As much as anything else, The Arena is a coming-of-age story, as we watch Noah try to support himself and figure out how he wants his relationships to be. Arena is highly successful as a queer version of this trajectory, attentive to the intricacies of Noah’s particular relationship to his own queerness without conforming to the demand that all queer stories be about coming out. It does not set Noah within an entirely queer world, noting his sense that he does not want this but also highlighting that sometimes he feels “not gay enough”. While stories that depict the more specifically queer spaces of London are also important, Arena is valuable as a queer story that defies the demand to exist wholly inside or outside of this space. It acknowledges some of the complexities of queerness through this. And nor it is all about romantic relationships; it also celebrates queer friendships and community through the role of Mairead, Noah’s best friend, and her girlfriend Jenny. This feels especially stark in contrast to the toxicity Noah’s relationships with Fraser and Dylan.

At times, though, some of the other characters feel thinly-sketched. It still works, because Noah is so vivid and on one level, Noah’s difficulties make him self-absorbed. The comparative faintness of other characters we get a sense of the narrowing of Noah’s world. But I would have loved to know more about Mairead and Jenny, partly because I’m sure that Konemann would have had interesting things to write about them. Nonetheless, The Arena is an assured, unique debut, and Konemann will certainly be one to watch.