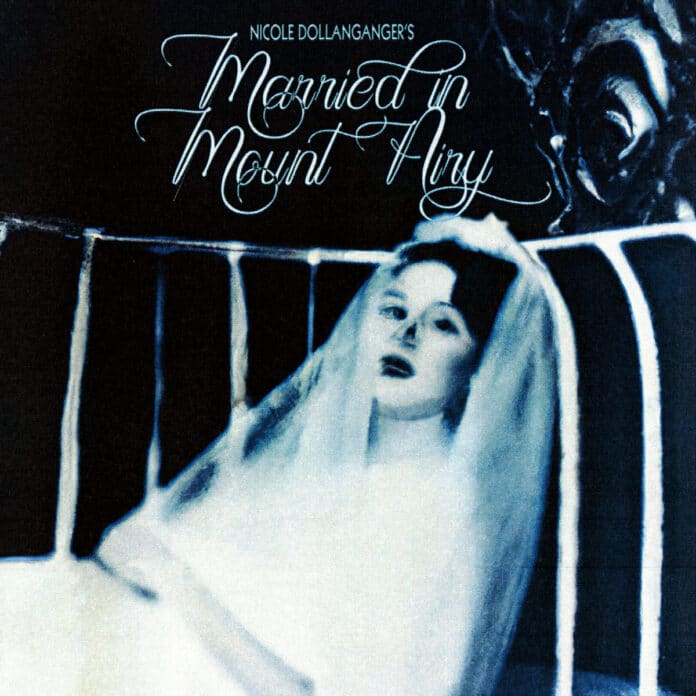 “All you have to bring is your love of everything.” What a strange line for an ad jingle. The way Nicole Dollanganger wraps her voice around it on the title track of her remarkable new album, you’d think it was made up; just one of those vivid, unnerving details she carves into her dark storytelling. But the tune, taken from a commercial for a 895-room resort that was once a popular honeymoon hideaway, has etched itself into the minds of many a generation. In a 2017 essay, the journalist Ada Calhoun recalls hearing it as a child: “When I should have spent that time absorbed by Benson or Scooby-Doo, I worked to decode the lyrics to the Mount Airy Lodge song. By ‘love of everything,’ did they mean you would have to bring your love of volleyball and horseback riding and billiards? That seemed like a lot. Or did you just need to bring your husband, who was your “love of everything” – meaning that, of all the things, he was the one you loved above all?”

The Mount Airy Lodge, like many of the love songs Dollanganger has written since she first started uploading her lo-fi bedroom folk music online, had a tragic end. A few years after it was demolished in 2001, the Mount Airy Casino Resort was built in its place when casino gambling became legal in Pennsylvania. In the lead-up to her last album, 2018’s Heart Shaped Bed, the Southern gothic singer-songwriter visited the Poconos and was struck by how “everything is love-based, but it’s broken down and destroyed”; the abandoned motel as a metaphor for doomed love was something she’d already soaked in. Despite the unusually long wait between albums, Married in Mount Airy seems to pick up where that record left off, as if the paradox kept coming back to haunt her. But the shift in framing is immediately apparent: while the protagonist of Heart Shaped Bed dreams of wedding nights spent at seedy motels, the new album begins by reckoning with the past, treating memories like ghosts you can’t help but hold onto. We’re told the marriage happened, “sometime in the late ’60s”; it’s the cloud hovering above it, the mystery left in its wake, that then slowly creeps into view.

In Dollanganger’s music, love and eroticism have always been inextricable from violence and pain. They get tied up in bleak, gruesome, and often ambiguous ways, but Dollanganger is careful not to veer into exploitation. Married in Mount Airy goes one step further, avoiding explicit descriptions in favour of vague yet searing lyrics that amplify both the power and horror that permeates them. Though her recollection is hazy on the opening track, she notes that “there was something very strange in the air” in the lover’s suite; the sense of foreboding grows on ‘Gold Satin Dreamer’ just by mentioning the smell of raw steak. At the same time, Dollanganger cuts through the murkiness of remembering with some of her sharpest, most nuanced poetry to date: “All of those dreams left out in the sun/ They run like syrup and clot like blood/ Disfigured beyond recognition,” she sings against the singe and shimmer of guitar strings.

By treading similar ground as its predecessor, Married in Mount Airy highlights Dollanganger’s ability to transform the familiar into the uncanny, and her refined approach is mirrored the delicate subtlety of the production. Working with longtime collaborator Matt Tomasi, she fashions hauntingly ethereal, gloomy sounds that do more than make space for her songwriting. Though it masquerades as the sunniest track on the album, ‘Runnin’ Free’ is a suffocating portrait of loneliness rather than escape, which is glimpsed only by the sound – not even the sight – of motorcycles driving off into the night, before expanding into music, drama. Weeping guitar accompanies her as she wonders what to make of all the tears she’s cried over her lover on ‘Bad Man’; cross it with the line about how “all my tears and rage could load a revolver” on ‘Nymphs Finding the Head of Orpheus’, and you can probably figure out how things ended.

Whatever crime transpired isn’t central to the story of Married in Mount Airy; Dollanganger instead focuses on the abusive dynamic that brought the relationship to a boiling point – and even then, it’s more about the long, tortuous process of letting go. “Isn’t it strange how you and I/ Spend the best part of our time/ Just saying goodbye,” she sang on ‘Lacrymaria Olor’, likely referencing the 1951 film A Place in the Sun. And if following the dream was always a false promise, if there’s no longer room for it, maybe it’s there, in the movies, that she can finally bury him. The album’s penultimate track finds our protagonist in her lover’s wake, feeling sorry for all “the beautiful women there in your death/ Crying out they swear they will love you until their very own last dying breath.” With a smile on her face, she continues: “There’s a spot in the grass waiting for you at Whispering Glades/ And Hollywood suits you, darling, I think you should stay.” There, with her love of everything.

Album Review: Nicole Dollanganger, 'Married in Mount Airy'“All you have to bring is your love of everything." What a strange line for an ad jingle. The way Nicole Dollanganger wraps her voice around it on the title track of her remarkable new album, you'd think it was made up; just one...