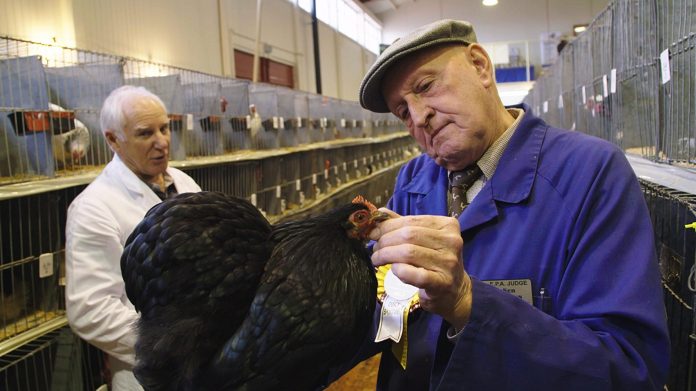 This quirky and hilarious documentary follows ‘The Christchurch Poultry, Bantam and Pigeon Club’, their love of chickens and rivalries as they enter the 148th New Zealand Nation Championships.

We are welcomed into the lives of a group of people who’s love for chickens bring them together in the form of The Christchurch Poultry, Bantam and Pigeon Club. As the lead up to the Nation Championship begins we are introduced to a variety of different people and personalities who’s ages range from young to old, all of them care and tend to their flock of chickens, making sure they look fabulous for the championship, but as the championship grows closer conflicts emerge between the chairman of the club, Doug, and the members.

Even though the club is strange to people who aren’t so called ‘Chick Fanciers’ it’s always pleasant to see people so passionate about the thing they love and these members truly love chickens, they are so ardent about taking care of them, waking up at 6am and working all day to tend to them, these chickens are their lives.

The characters that are focused on are all so unique and fascinating; they are unknowingly hilarious and stay interesting throughout. They never shy away from the camera and you can really tell that they care about the club and championship, specifically one, who is happy constantly; with no wife or family as it seems he is contempt with his chickens.

Furthermore, the chickens themselves are really impressive, I’m not an expert in chickens or how they are supposed to look but the time the people take and precision they go to is so remarkable. Similarly, the judges of the championship take the matter incredibly seriously, judging the chickens on their eyes, feathers, shape, size, colour etc… any mistake will go noticed as they following the New Zealand Poultry Standard.

Additionally, the film’s story includes fowl play and tension inside of the club; many of the members disagree with how the club is run with the current chairman, Doug. As many of the members want young Mark to take over he is reluctant over what Doug has done for him in the past. It is quite heartbreaking to see the 148-year-old club slowly crumble and you want them to resolve their issues and for everyone and their chickens to get along.

Pecking Order is a delightfully well-told story that follows a number of wonderful characters whose dedication and excitement shines through, sure to keep you laughing throughout and interested in who will rule the roost.

Review: Pecking Order (2017)Pecking Order is a delightfully well-told story that follows a number of wonderful characters whose dedication and excitement shines through, sure to keep you laughing throughout and interested in who will rule the roost.