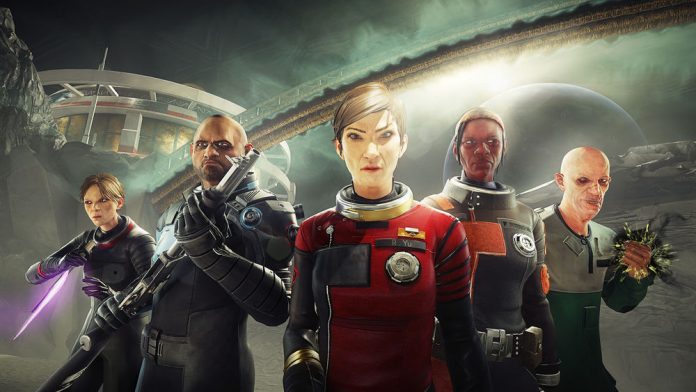 2017’s Prey was a rarity in the modern AAA gaming market. As a first-person science fiction RPG directly inspired by the likes of System Shock, it’s the exact game that many genre fans were waiting for, intrigued but ultimately dissatisfied by the relativity simplicity we saw in the Bioshock trilogy. Here was a game with far more freedom than many modern interpretations of the genre feel fit to give, and we loved Prey all the more for it. Now with the first major DLC Mooncrash in circulation, we finally have another excuse to jump into the world of Prey again, and what a hell of a jump it’s been.

The basic backstory as revealed by the 2017 game comes from the idea that JFK was never assassinated, and that the space race ended up more collaborative than combative. Aided as this was by the secretive discovery and research of an alien race, the Typhon, things ended up turning to crap as some of the Typhon on the space-based research vessel escaped captivity and got a little murdery with the crew. Following an abandonment of the project by the United States, who gained full ownership after the collapse of the Soviet Union, the vessel was obtained by the TranStar organization, and renamed from the Kletka to Talos 1. This DLC is not set within Talos 1, but rather revolves around the moon based support system, called the Pytheas Moonbase.

Mooncrash starts out with our playable character waking in their tiny little space pod. Nearing the end of long off world working shift, orders come in over the radio of one last mission, after which you will finally be sent back home to your family. The idea, as laid out by your support, is to replay a simulation based off of the memories of various survivors of the Pytheas Moonbase disaster, in an attempt to understand what really happened before things turned to space custard.

Much of what was loved in 2017’s Prey comes back in full force with the Mooncrash DLC, but the kicker really comes in how the game contextualizes this gameplay. There is still a multitude of imaginative weapons, tools, and abilities, but unlike the first game, these are separated between an eventual roster of five different characters.

The idea here is that when you start a run on the simulation you get to choose between the different unlocked characters, and do your best to complete as many objectives as you can and finally escape. The longer you play before your character succumbs or escapes the higher the slowly increasing threat level reaches, bringing with it stronger alien spawns and environmental hazards. Once one character either dies or escapes the next one is brought in, until all characters have taken part, and the simulation resets.

This gameplay loop is rare in first person games, though any fans of roguelikes will see the inspiration as fairly obvious. Each new loop changes enemy and item locations, modifies levels in ways which block off certain paths, and can power down some sections or sucks the air out of others, just to name a few of the possibilities. All of this means that no two play-throughs ever feel exactly the same, and you never feel safe in a dangerously unpredictable world. This is aided by the slowly increasingly base difficulty which rises as you manage to unlock all of the five playable characters and complete their various story-based objectives. While this does mean that the game gets harder the longer you play, both in terms of individual sessions and overall difficulty, there are other elements of the roguelike genre which help maintain difficulty balance.

Prey offers a couple of main elements which persist through resets, allowing your team of characters to slowly evolve and keep pace with the similarly evolving Typhon threat. First is the point system, which is based on how many enemies you kill, how many objectives you complete, and how many skill-based moves you make during a character’s run through. These can be spent between characters or rounds to purchase items and equipment, meaning you can customize your loadout for what you want to achieve. Going for an exploratory run? Don’t bother spending much, other than what keeps you alive. Want to seriously try escaping? Fully deck out your character with high-level gear, and blast your way to success.

The persistent element comes from what is essentially the same skill and leveling system of the base game, the Neuromods. Unlike in the base game, the skill trees available to each character are far more limited, meaning that each character has a specific role to play, with their skill selection reflecting their personality, and their position within the base. One of the characters is better with repairing and can summon turrets, while another focusses on straight shooting and another on casting psionic attacks. These varied gameplay types all benefit from the fact that the general running and shooting minute to minute type stuff is far superior to the gunplay and feel of many RPG based first-person shooters, putting the likes of even the vastly improved Fallout 4 to shame.

What really sets the game apart is how all these different elements combine into one incredibly satisfying loop of exploration, progress, understanding, and repetition. Progress within runs is maintained, with character abilities being able to perform tasks which open up further options for the others. As an example, one of the escape options is a Typhon tech portal. To use this portal it first must be repaired by one character, and the computer controls must be hacked by another. This creates a rare feeling of teamwork not easily possible for single-player experiences.

As much as we respect what the CryEngine can do, we can be a little hesitant when it comes to performance. Fortunately, Prey and the Mooncrash DLC stand as some of the best examples of CryEngine done well, with looks and performance both operating at the highest levels. The game might not set itself to the highest heights, but it is still a great looking and sounding game, and this is aided all the more by the steady performance.

The general aesthetic is perfectly reflective of the base game, appearing as a unique blend of the obviously Typhon-inspired alien technology and science fiction tech which carries with it obvious attention to early real-life American and Soviet space exploration. These elements combine to create an experience far more believable that it has the right to, and this alone makes it a fantastic experience for sci-fi fanboys like myself. The sound work here can also be fantastic as well, with the muffled silence of vented areas only transmitting sound through the vibrations directly felt by your suit coming across as especially brilliant and terrifying.

If you enjoyed the base game then you owe it to yourself to play Prey: Mooncrash. If you enjoy first-person RPGs and haven’t yet tried the game out then there is no better time to start, with Prey being in many player’s minds the best shock game since System Shock 2, this reviewer included.

Mooncrash is not just a great DLC, it’s a rare and fantastic combination of different genres into a new whole which we can easily see other companies copying outright. A great follow-up to one of the best in the genre we have seen in a very long time, and one which is hopefully indicative of where Arkane Studios aims to take the Prey IP in the future.

Ways You Can Locate Independent Casinos That Will Accept Your Registration

All Playable Clubs & Countries in FIFA 23

Top 5 LOL Midlaners for the 12th Season of the Game