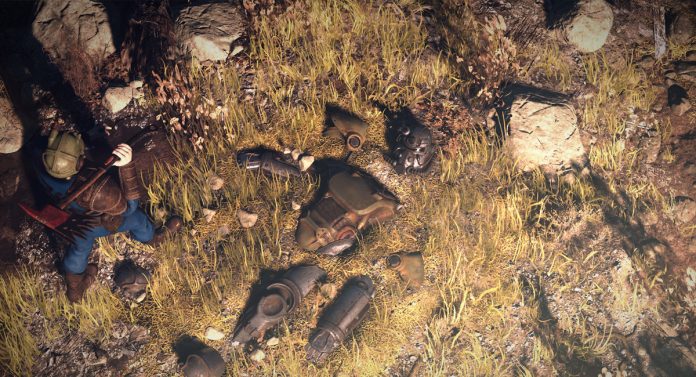 Sometimes when it comes to the things you love you see a negative turn coming. In a few cases, as we have seen with Bethesda games over the last decade, these are so obvious, so undeniable, that it can be hard to believe they’ll ever follow through. Bethesda, though, are nothing if not predictable. Like many AAA developers their desire for profit over quality has become an increasing problem for a while now but, unlike most developers, many of their issues have been given a free pass.

True, but that doesn’t mean they shouldn’t be addressed. Bethesda is one of the biggest in the business after all, and many of their bugs are fixed within a week from fan modders, yet are never fixed officially.

“Their bugs are cute, like a puppy pissing on the rug!”

You’re free to think that, but you’ll still end up with the lingering smell of urine.

So when Fallout 76 came out and was just as much of a nightmare as so many longtime industry followers predicted, it’s difficult ’to appear surprised. What is notable this time, however, is that the irradiated Fallout 76 straw has finally mutated enough to break the brahmin’s back.

Backlash over this game is enormous, and with that in mind, I thought it would be fun to take a look back at just some of the issues which have plagued this release, to better illustrate the problems to the uninitiated, and hopefully raise some awareness about the dangers of purchasing a Bethesda game on release. Note that some of these have been fixed already, and many more will be repaired in the future. Does this make them acceptable on release for a full-priced supposed AAA game? Well, no.

We expected it, but Bethesda managed to limbo under the bar of our predictions impressively nonetheless. In the current age of gaming we expect only a few console games to give out a constant 60 FPS, as most developers are more concerned with a more detailed game-world over a better-feeling experience. Mostly, today’s games settle for a locked 30FPS, with enough overhead to guarantee this rate almost constantly, with a few minor dips.

Fallout 76 not only had a frame rate which would rarely stick to 30fps in all but the most contained of scenes, but it even managed to hit as low as 12fps in these tests performed by notable YouTube game testers, Digital Foundry:

Tying into this issue was the inevitable problem which occurred when Bethesda chose to tie physics to the frame rate. This has long been known to cause negative effects when coupled with unstable performance, as was the case here.

If you look at the ground the game has less to render, and thus it runs faster. Because physics is tied to this, any player running around while looking at the ground will themselves run faster. Stare at your feet and outrun anything. Just like in real life.

Entirely too common with online games today, yet always frustrating. As critics like Jim Sterling have pointed out – it’s one thing to demand always online connections from the player, but if you can’t deliver that as the developer then you are fundamentally abandoning your responsibility to paying customers.

This doesn’t stop at random outages either, as players themselves can crash the servers in an incredibly simple to replicate manner. The endgame in FO76 revolves around the dropping of nuclear bombs. This is actually quite a spectacle, and ties into a fond memory many players will have with Fallout 3. Drop more than a single bomb at the same time, though? Say goodbye to the server.

Part of this issue also comes down to the autosave system. Constant little disconnects are annoying as it is, but when you couple that with lost progress you end up frustrating in two ways for the price of one.

To become a high-level user of Power Armor in the Fallout games you need to treat it as a part of your own body. An extension of yourself, fused to the very core of your being.

76 took this a little more literally, with many players unable to escape their Power Armor without quitting the game entirely.

It even warps your character model in a nightmarish way, which is actually a bonus in my book, but not worth the hassle.

Even better, this is a glitch which existed within Fallout 4 which released over three years ago. Fans fixed it almost immediately, Bethesda never bothered, and now we see it again in 76. Of course, the online nature means fans can’t fix it for them, so we’ll see how long it takes Bethesda to figure out what the modders did years ago.

Go to a quest marker to find an enemy. Not there and you can’t complete the quest? Oh well.

Alternatively, stumble across an enemy which exists beyond your tangible realm. Can’t see them, can’t hit them, but they can hit you.

Never mind, just log off for a few hours and hope they are gone when you come back.

Not a glitch, but absolutely a feature which all online games with voice chat should have with zero exceptions. In FO76, players are always transmitting over their microphone. Apparently, nobody who developed this game has ever played an online game before, as the results of this are immediately obvious to anyone who has.

Well, they’re immediately obvious to most that haven’t as well, but not to anyone on the 76 development team.

If any of those sound interesting to you then Fallout 76 has you covered.

The Most and Least Effective Weapons in History

The Cryolater, as the name suggests, is a gun which uses cold to slow and kill an enemy. Annoying enough, but temporary. Only there is an extremely common glitch were anyone hit by this gun will be slowed permanently. Re-log if you want, makes no difference.

On the other hand, there is a glitch which commonly occurs with powerful weapons which causes them to hit for precisely zero damage. This can occur against both enemies and players and has been noted to happen as soon as the third shot fired when entering a game.

These are just a few of the larger and most common issues which players have experience playing Fallout 76, with the full list being many times larger. This is also not taking into account the surrounding behavior of Bethesda, and their attitude when it comes to taking responsibility for their overwhelmingly predictable mistakes.

Many of us didn’t buy Fallout 76 on launch because we wanted to see how it would shake out. Many of us hoped for the best, and most of us were let down. Just the latest in an increasing trend of the biggest AAA developers releasing shoddy products, we hope that this can at least serve as a warning to the next developers who want to try to pull this behavior.

We know gaming is a business, but it used to be an industry of passion first, of quality and gameplay vision before all else. As Fallout 76 takes one further step into infecting gaming with big-business manipulation and profit over quality, we have to wonder exactly where the tipping point lies. Will we have to see more non-apologies and the likes of EA’s responses, or will big publishers and developers finally understand that they can only milk customers so far before they say enough is enough?

At least with gambling laws regarding loot-boxes finally coming into play, we have some legal protection in place, but you can bet those companies posting record profits off of these practices will not go down gently.

I would caution against ever buying a Bethesda game at launch, even the upcoming Elder Scrolls sequel. Yeah, I want it too, but Bethesda have spat in customer’s eye’s enough, and you shouldn’t give faith to those who constantly abuse it for their own short-term gain.