The Best Weapons in Gaming 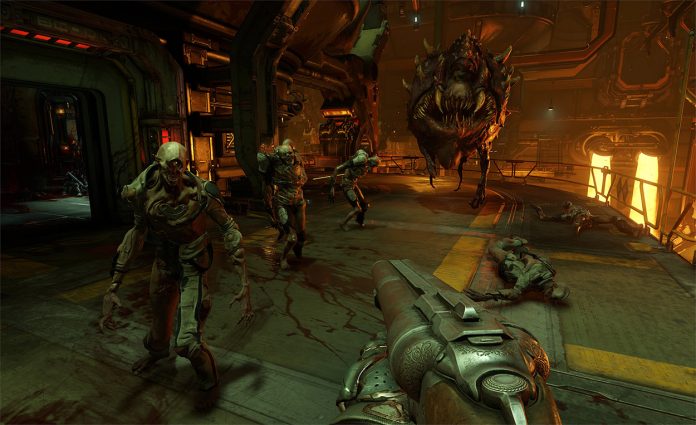 As an interactive medium, feel plays an enormous part in how much we enjoy gaming. Despite being disconnected from the experience by our screens, a combination of audio and visual feedback can give us an appreciation far greater than the sum of its parts. Whether the boom of a shotgun, the force of the enemy being blown back, or the giblets to which they are reduced, there are many aspects which, together, form our favourite weaponry.

In this article we want to go over some of the best in gaming’s long history, and why these have remained at the top of our list despite some being even older than many of our readers.

Doom was not the original FPS game, but it was the first one to raise the visibility of FPS gaming to the world stage. While much of this was due to the technical wizardry and advancements which made Doom possible, no shortage of praise came down to feel of the weapons.

Doom was good, Doom 2 is often seen as better, and a lot of this comes down to a single weapon – the super shotgun. Utterly useless at long-range, this double-barreled boomstick was made for getting up in the monsters faces and showing them why Doomguy would go on to become the stuff of demonic nightmares.

Everything about the super shotgun was great, from the boom of the shot to the click of the reload, and it’s animation. Doing an enormous amount of damage, this was a weapon which understood that success in Doom was about maneuverability, about dodging around at awesome speeds, picking the perfect moment, and only then dropping the hammer. Very few games have even come close to approaching the glory of this weapon, as perfect as it is as a means of monster disposal.

The original Blood had many great weapons, in fact, it was one of the few which offered a shotgun close to Dooms in terms of awesomeness, but it is the flare gun which deserves the most respect. One of the first weapons gained by the player, fitting in what would traditionally be considered the pistol slot, the flare gun remained a key part of the arsenal through the entire experience.

The primary fire for the Blood flare gun fires a single flare projectile, which would stick into enemies it hit. For most human (and former human) enemies this would then burn for a few seconds before catching them aflame. Running around for a few more seconds, screaming all the while, the enemy would then collapse in a burning heap, in what is one of the most brutally satisfying murder methods delivered by such a humble rescue tool.

If you have the ammo for it, the secondary fire shoots eight flares at once, igniting large groups of enemies in a single shot. As the enemies in Blood are far more lethal than in most FPS games, this just added a cherry on top of what was already a fantastic gun.

Another game which was a technical marvel by the minds at ID, Quake 2’s weapons made both the multiplayer and singleplayer a joy of an experience. While the rocket launcher also deserves a mention, it was the rail gun which was the real star of the show.

Firing slugs at close to the speed of light, this high-damage hitscan weapon made a suitably futuristic sound on both firing and charging up another round for a shot. Capable of reducing many enemies to mincemeat with a single blast, the rail gun would go on the become a staple within future Quake games, as well an inspiring many imitators in other series.

Sure, it could be difficult to hit an enemy with in the heat of battle, but once you did, they sure knew about it.

Half Life 2 had some big shoes to fill, after the genre-evolving original, and in most ways in not only met those expectations, it exceeded them. One of the many additions which made this game so special was the first mainstream delivery of a physics system which many players had experienced. While the gameplay implications in terms of puzzles could come across as gimmicky, the gravity gun, or Zero Point Energy Field Manipulator, was met with universal acclaim.

Able to pick up small to medium physics objects within the maps, the gravity gun could then eject them at enormous speeds, harming, killing, bisecting or destroying any enemies who remained in the path. This meant that almost everything in the game which wasn’t nailed down became a potential weapon, from the obvious to the hilarious.

Players would generally start off with the explosives, both in terms of returning grenades to enemies and firing gaming’s ubiquitous red barrels. More original but no less devastating were the saw-blades which sat around some maps, especially the zombie-infested Ravenholm. Other amazing projectiles of notes include radiators, cinderblocks, paint cans, and even the humble toilet.

In the last section of the game, players were even treated to an upgraded version of this weapon, after a Combine confiscation field goes awry. This upgraded version can pick up actual enemies, and then fire them back at their friends in an incredible display of ragdoll technology. It’s small wonder that many would go on to copy the gravity gun though, as is so often the case, almost all fail to live up to the original.

Turok 2 was a fan favorite back on the N64. Great split-screen, freaking dinosaurs, and imaginative maps made it undeniably one of the system’s best. For most, though, the first thing that comes to mind when thinking about Turok is the cerebral bore.

Locking onto enemies, this weapon shoots a projectile which seeks and latches onto their heads. Following a few seconds of the horrible noise of machine boring into flesh and through the skull, the projectile then explodes, taking the head of the victim with it.

We have to thank the limited graphics technology of the time for helping contain what is still one of the most gruesome ideas this side of Mortal Kombat to simplistic representation. That sound, though, that sound sticks with you.

The final weapon on our list comes from the Duke. The first 3D entry in the Duke Nukem franchise is the best remembered, and for good reason – the follow-ups ranged from okay to terrible.

At the time of its release back in 1996, Duke was one of the best looking FPS games on the market.  These looks were aided by cool maps, enemies, and, most of all, guns. While the freeze ray was also a cool neat addition, it was the shrink ray that had us laughing the most.

Hitting an enemy enough times with this one reduced them to the size of small insects, utterly removing them as a threat for a few seconds. The best part of this is that if Duke walked up to the newly diminutive aliens he would then stomp on them, grinding their hopes and dreams for conquest under his mighty boot.

So that’s our first list of the best guns in gaming, though we’ve only really scratched the surface of what’s on offer. So what have been your favourite guns from gaming over the years, and where do the above fit within your personal lists?