Joni Mitchell has announced a new box set titled The Reprise Albums (1968-1971), which will feature her prolific four-album run for Reprise Records — 1968’s Song to a Seagull, 1969’s Clouds, 1970’s Ladies of the Canyon, and 1971’s Blue. The collection is set for release on June 25 via Rhino to celebrate the 50th anniversary of Blue. Below, listen to a remastered version of the album’s classic track ‘A Case of You’.

All four albums featured in the box set have received full remasters. Talking about remastering Song to a Seagull in particular, Mitchell said in a statement: “The original mix was atrocious. It sounded like it was recorded under a jello bowl, so I fixed it!”

The Reprise Albums (1968-1971) also includes an essay by singer-songwriters Brandi Carlile, who writes, “In my opinion, Blue is the greatest album ever made. Blue didn’t make me a better songwriter. Blue made me a better woman. No matter what we are dealing with in these times, we can rejoice and know that of all the ages we could have lived through, we lived in the time of Joni Mitchell.”

Pre-orders for the vinyl, CD, and digital versions of the box set are currently available at Mitchell’s official website. The Reprise Albums (1968-1971) is part of Mitchell’s ongoing archival series, with a press release noting that a second installment focusing on the timeframe when she recorded these four albums will be released later this year. 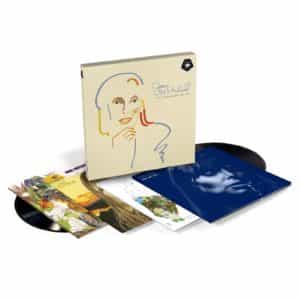