Belle & Sebastian have announced a UK and European headline tour beginning in January of next year. The band is set to make their first live appearance since 2019 in Aberdeen on January 31, 2022 followed by a string of UK dates, including a two-night residency at The Roundhouse in London. They’ll then embark on the European leg of the tour on April 11 in Munich, Germany and will make stops in Italy, France, Switzerland, the Netherlands, and Scandinavia, before concluding in Brussels on April 29. Tickets go on general sale on Friday (June 18) at 10am BST/11am CET, while a fan pre-sale for the UK shows begins Wednesday (June 16) at 10am BST /11am CET. Find the full list of dates as well as the tour poster below.

Last December, Belle & Sebastian issued What to Look for in Summer, a live double album featuring selections from the band’s 2019 world tour. 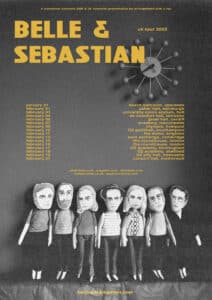