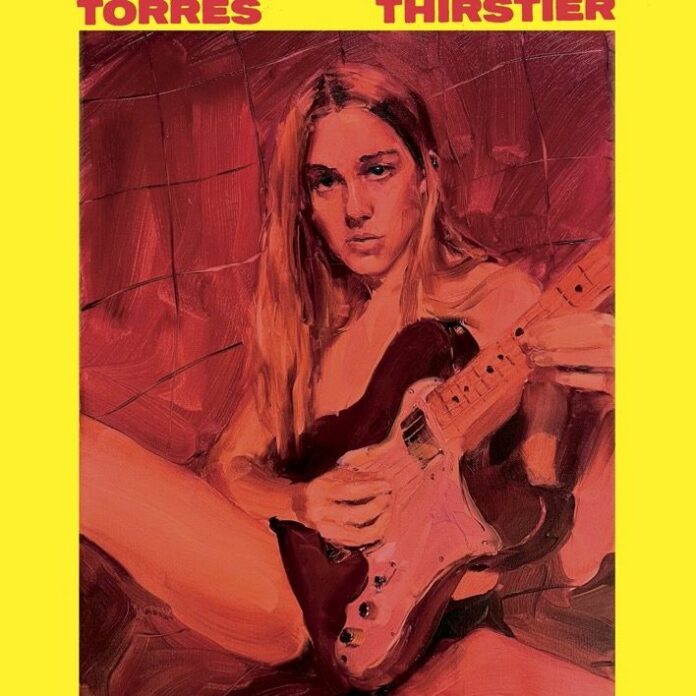 Between Japanese Breakfast’s Jubilee, Faye Webster’s I Know I’m Funny haha, and now Torres’ Thirstier, it would seem that indie artists are finally starting to see the light at the end of the tunnel. If the idea of a joyful indie record once sounded oxymoronic or markedly uncool, the fact that it’s now the main hook behind some of the genre’s biggest albums of the year could be interpreted either as a sign of change or simply a different marketing strategy. After all, you could hardly make the case that any of those albums are simply about joy – both Japanese Breakfast’s Michelle Zauner and Faye Webster have a knack for traversing a wide range of moods, mapping the subtle contradictions that make up overwhelming emotions. Mackenzie Scott, the artist behind Torres, is no less of a sharp or eclectic songwriter, but her fifth studio album is by far the most consistently bombastic and exuberant of the bunch, for which “joyful” is truly an apt description – no small feat for a record that includes the line “now all I can do is cry and worry.”

Part of the sense of catharsis one gets from listening to Thirstier comes from having witnessed Scott’s personal and artistic journey. From her earliest releases, songwriting served as a means of examining the effects of her religious upbringing as well as different facets of her identity, and her constant experimentation marked her as an artist always striving to find the right sound for that restless introspection. Rather than trying to carve a space for all her contradictions, the new album acknowledges past struggles while channeling all the urgency and directness of her previous releases into a gloriously catchy and anthemic record. “I’ve been conjuring this deep, deep joy that I honestly didn’t feel for most of my life. I feel like a rock within myself,” she said in a statement, and part of that stability came from Scott’s relationship with her partner, the visual artist Jenna Gribbon. Thirstier finds happiness not by pretending she suddenly knows the answers to all the questions that have tormented her, but by focusing on and celebrating the strength of her devotion.

Our natural attachment to this kind of personal narrative may be partly what makes the album enjoyable, but Scott, along with co-producers Rob Ellis and Peter Miles, have done a great job of sonically capturing those bursts of euphoria. Thirstier is powered by blistering hooks, gleaming synths, and dynamic percussion, all of which serve to augment the kinetic energy and outsized ambition of Scott’s writing. The sheer infectiousness of songs like ‘Don’t Go Puttin Wishes in My Head’, ‘Hug From a Dinosaur’, and the title track was undeniable when they came out as singles, buoyed by some of Torres’ biggest and most danceable choruses, and they lose none of their fervour alongside more intimate cuts like ‘Big Leap’ and ‘Kiss the Corners’. These are less memorable but vital in their own way, making the louder moments feel all the more invigorating.

‘Keep the Devil Out’ contains both worlds, a thrilling closing statement that makes the whole album feel like a kind of exorcism. In the album’s thornier moments, like the whirring post-chorus of ‘Are You Sleepwalking?’, you can feel a different intensity creeping up: “Funny, isn’t it, how my nerves can’t even tell the difference/ Between pain and pleasure,” she sings on ‘Hands in the Air’. Scott recently spoke about the negative connotations of being called intense, and Thirstier harnesses that energy in gratifying and often surprising ways. Halfway through the closer’s hellish, uneasy vacillations, the atmosphere opens up as heavenly synths invoke Scott’s epiphany: “Get a load of this/ I had a vision/ Tomorrow we rise/ From our deep-sea slumber/ Make ourselves a new world order/ I have got all the hope I need.” By this point, Scott has already managed to bring that vision to life, but seeing it thrive in the midst of such chaos is a testament to her newfound confidence.

Album Review: Torres, 'Thirstier'Between Japanese Breakfast’s Jubilee, Faye Webster’s I Know I’m Funny haha, and now Torres’ Thirstier, it would seem that indie artists are finally starting to see the light at the end of the tunnel. If the idea of a joyful indie record once sounded...