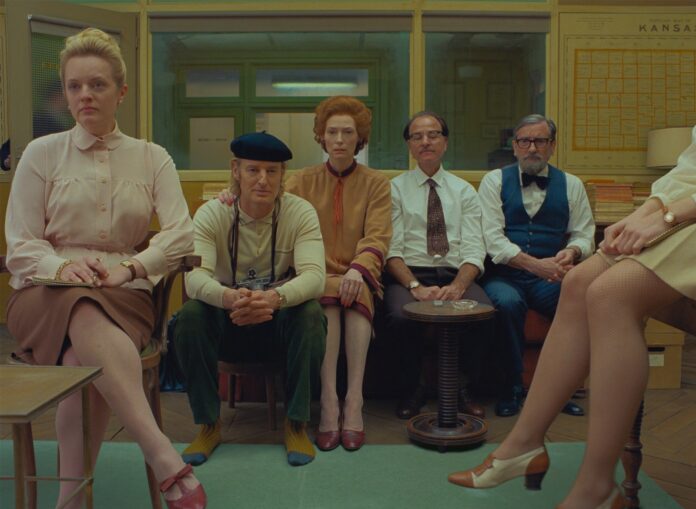 Wes Anderson’s latest film, the aesthetically pleasing comedy The French Dispatch, is another star-studded affair to add to the auteur’s oeuvre. Split into three parts, the film is described by the director as a love letter to journalists – in this case, those of a fictional newspaper in a 20th-century French town (aptly called Ennui-sur-Blasé). Owen Wilson’s laid-back, easygoing character introduces viewers to the setting in a humorously matter-of-fact way, adding tidbits of insider information to help the audience settle into this new world – though it will feel familiar to Wes Anderson fans.

The first of the three anthology-style parts, “The Concrete Masterpiece”, takes place in a prison, where Benicio Del Toro’s Rosenthaler is serving time for murder. He’s also in a relationship with a prison guard (Léa Seydoux), whom he paints. These abstract works of art become extremely valuable, though nobody can understand why – in fact, nobody can understand what Rosenthaler is depicting in his paintings.

The second part, “Revisions to a Manifesto”, is inspired by the French student protests of May 68. French Dispatch journalist Lucinda Krementz (Frances McDormand) is reporting on the revolution when she meets the precocious Zeffirelli (Timothée Chalamet). She helps the self-proclaimed leader of the revolution with his manifesto.

The film concludes with “The Private Dining Room of the Police Commissioner”, an action-packed sequence involving criminal syndicates, a kidnapping, and haute cuisine. This time, it’s food writer Roebuck Wright (Jeffrey Wright) recounting his experience of dining with The Commissaire of the Ennui police force on a televised interview.

This lively slice of fiction is an immersive viewing experience full of humor, thoroughly developed settings, and a motley of intriguing characters. Here are some of the best quotes from this latest foray into Wes Anderson’s cinematic world.