Yawners, the alias of Madrid musician Elena Nieto, has shared a new track from her forthcoming album Duplo. ‘Honey’ follows previous single ‘Rivers Cuomo’ and comes alongside the announcement of a UK and EU tour. Check out the single as well as Yawners’ upcoming tour dates below.

“I wrote this song in English, then in Spanish, then I forgot about it, and finally brought it back in hybrid form in both languages,” Nieto explained in a statement. “It’s a love song, everyone from any corner of the world can identify with it and that’s why I like that it’s in two languages. Because the message is universal. It’s about when two people like each other but they’re playing the ‘I don’t like you game’. It’s kinda fun to play but if you play too much, you screw it up.”

Duplo, the follow-up to Yawners’ 2019 debut LP Just Calm Down, arrives on May 6 via Big Scary Monsters. 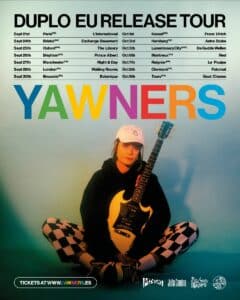 Jack Antonoff Wins Producer of the Year, Non-Classical at 2023 Grammys