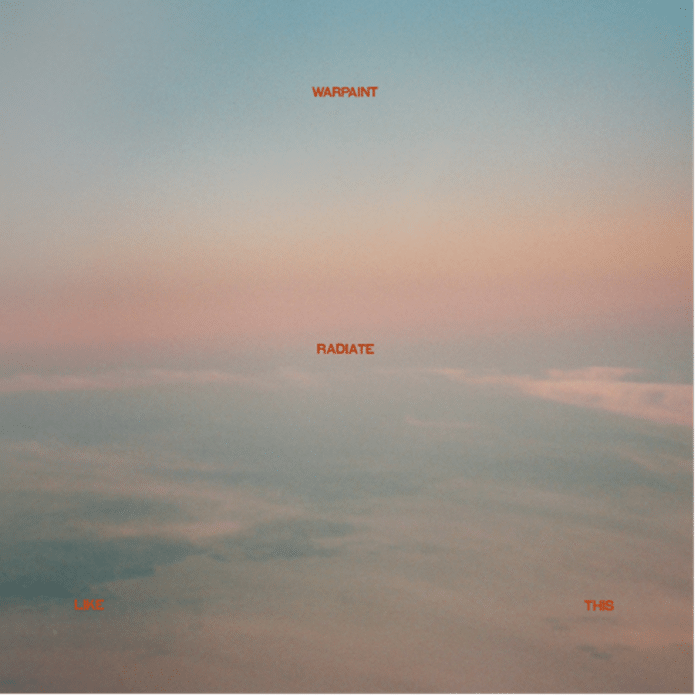 Like a warm summer breeze, Warpaint can shift your mindset with the lightest touch. When it comes to the kind of ethereal, layered dream-pop that has become the group’s trademark, achieving that effect is more of a basic requirement than a unique feature – it’s the reason people will gravitate towards music built on hazy atmospherics and lush, cavernous production even if it conceals whatever’s bubbling underneath the surface. Throughout their 17 years as a band, Warpaint have shown more personality than most acts operating in the same space, though that has less to do with the emotional depth of their music than the dynamic interplay between its four members and their ability to subtly expand the band’s sound. They take their time to let the music grow, weaving spacey, intricate arrangements and trusting the listener to find their way into them.

With Radiate Like This, their first full-length since 2016’s Heads Up, they’ve used the gap between albums to deliver a more considered and honest representation of themselves. As the album’s lead single and opening track, ‘Champion’ is a startling introduction to this new era, a track whose self-confidence feels both natural and earned. Its sense of empowerment isn’t the result of radical reinvention so much as striking a delicate balance – between softness and strength, the personal and collective, nature and self: “We’re all the same sun/ We’re all our own sun, too.” Rarely has the simplicity of Warpaint’s lyrics landed with such impact: When they sing about breathing in and out, it doesn’t feel like the kind of generic line that’s meant to sink into the background, but an exercise in making the song’s affirmations feel tangible.

Even if the rest of the album doesn’t come close to reaching the same heights as ‘Champion’, its spirit of openness still shines through. Warpaint may have relied on lyrical ambiguity and abstraction for most of their career, and Radiate Like This neither breaks that tradition nor makes an effort to resemble a coherent narrative – yet the sequencing makes sense both sonically and thematically, particularly in the first half. The positivity of ‘Champion’ gives way to the raucous and upbeat ‘Hips’, which exhibits a wonderfully eccentric side of the band that was mostly absent from the pop-leaning Heads Up and could get buried in the lusciousness of 2014’s self-titled LP. On songs like ‘Stevie’, Warpaint favour a vibrant and playful sensuality over vaguely familiar moodiness. Compare a line like “You make me wanna dance” to “Love is to die/ Love is to not die/ Love is to dance,” one of the most memorable hooks off Warpaint, and you’ll get a sense of the album’s new direction.

The group doesn’t exactly veer away from its signature sound, but it’s easier to hear how they adjust it to reflect the subject matter. Like ‘Stevie’, ‘Like Sweetness’ centers on romantic desire, but its languid pace conveys a different shade of longing. As they learn to loosen the knots that might have prevented emotion from seeping through their finely crafted songs, Radiate Like This becomes both a lighter experience and a more vulnerable one. After ‘Champion’, ‘Hard to Tell You’ confronts the fear of hurting someone by revealing what you truly want, but it’s not until ‘Melting’ that those barriers in communication begin to dissolve. The song moves slowly; if you don’t feel its heat right away, chances are you will when Stella Mozgawa’s muscular groove kicks in. Whereas ‘Champion’ works as a sublime meditation, ‘Melting’ is the visceral release.

If Radiate Like This prioritized enveloping environments in the way that previous albums did, perhaps the breezy, winking closer ‘Send Nudes’ would be a confounding conclusion. But by maintaining a style and peeling back its layers, Warpaint somehow make a song as jokey as that feel at home in the same album as ‘Champion’. So while a pun like ‘Disco // very’ might have come off as slightly awkward on Warpaint, ending with the line “have a cuppa noodles w me baybay” (as per the official lyric sheet) matches the lighthearted humour that permeates the new album, which is peppered with subtle flourishes like the bit of laughter that slips through the seductive ‘Proof’ or the mini Korg that colours the stripped-back ‘Send Nudes’. Warpaint still speak in their own ghostly, inscrutable language, but no longer hide behind it, and it’s easier to feel part of the conversation. It can be silly and disarming, but mostly, it feels like a breath of fresh air.

Album Review: Warpaint, 'Radiate Like This'Like a warm summer breeze, Warpaint can shift your mindset with the lightest touch. When it comes to the kind of ethereal, layered dream-pop that has become the group’s trademark, achieving that effect is more of a basic requirement than a unique feature -...