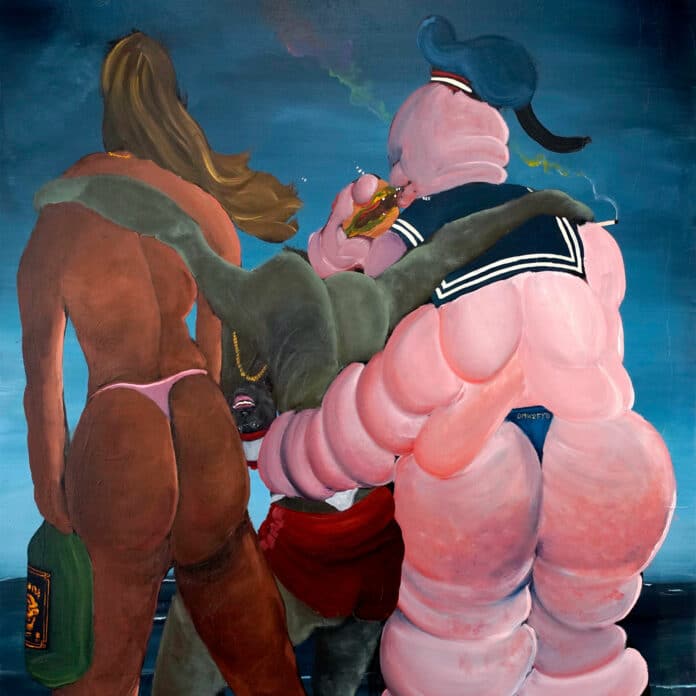 With a debut full-length as hyperkinetic as 2009’s Butter, it’s no surprise that Hudson Mohawke never ended up settling into a single sound, as popular and distinctive as it may be. Having racked up credits for Kanye West, Drake, and Pusha T, the Glaswegian producer would go on to showcase his growth on 2015’s Lantern, anchoring in a varied palette that subverted expectations while building on the potential of his earlier releases. Though he hasn’t released a proper album since, he followed it up with the Ded Sec – Watch Dogs 2 (OST) in 2016 and has kept busy during the pandemic with an archival mixtape series and the revival of his TNGHT project with Lunice. For all the restless maximalism that has come to define him as a producer, he seems to possess a rare ability to take stock of where he’s been and factor it into his process; you can find traces of practically everything he’s had a hand in on his third album, Cry Sugar, which drifts through hip-hop, hyperpop, soul, and various forms of dance music with equal parts irreverence and architectural precision, embracing a kaleidoscopic vision of euphoria. Not only is it his most ambitious effort to date, but the closest he’s come to capturing a kind of breathless transcendence.

In considering the direction of the new album, Mohawke found himself “stifled by the traditional chin-stroking, po-faced genre studies of UK club culture,” according to press materials, and consequently revitalized by the freeing possibilities of American debauchery, particularly when set against an apocalyptic backdrop. While he once sought to distance himself from the innovative sounds he became associated with as part of Kanye’s G.O.O.D. Music family, Cry Sugar is peppered with expertly employed soul samples and luscious strings that imbue the music with a spirit of humanity and a sense of drama. He’s able to twist that kind of infectious energy without quite negating it: after a drop he mostly refrains from using elsewhere on the LP, ‘Bow’ morphs into something altogether lewd, almost demented. There are surprisingly straightforward and anthemic moments in ‘Dance Forever’, ‘Come a Little Closer’, and the riveting 2-step garage of ‘Tincture’, but the nuanced complexity of Mohawke’s approach comes through no matter the genre framework; notice the whirring noise – purportedly that of an MRI machine – drilling its way through ‘Dance Forever’ and into your brain.

Whether below the surface or right at the very top, HudMo throws all sorts of delightful surprises throughour Cry Sugar. One of the most staggering examples arrives early on with ‘Intentions’, whose ecstatic house rhythms might make you wonder if Beyoncé has already hired him for future RENAISSANCE installments – even for a track that never stops mutating, foregrounding a dynamic vocal performance and sharp synth stabs, the abrupt transition right around the 3-minute mark still catches you off guard, slowly bringing every element in the mix into a melting point of bliss. Meanwhile, ‘KPIPE’ is an eerie concoction that evokes the feeling of dizzy exhaustion that kicks in when your whole body’s spent.

Although the producer has always had a penchant for experimenting with bizarrely colourful ideas, Cry Sugar appears more concerned with how they blend together, achieving a sense of cohesion without too much conceptual baggage. Not even in the album’s middle run does its versatility come off as overly jarring, proof that Mohawke has become a master at juxtaposing disparate sounds: the decadence of ‘Bow’ is followed by ‘Is It Supposed’, which is Porter Robinson-esque in its child-like optimism. Then comes a shimmering ballad called ‘Lonely Days’, which unfolds over five and a half minutes and stands among the most heartfelt songs in the producer’s catalog; the swirl of instrumentation becomes too blinding to decipher the exact stream of words, yet it all coalesces into a portrait of isolation that’s familiar yet unifying, its intimacy later echoed on ‘Come a Little Closer’.

The longer tracks on Cry Sugar are also its best. When the frenetic ‘Bicstan’ was released as a single, it seemed to condense so many subgenres under the electronic music umbrella that it stood firmly alongside a megamix sampling the entire album. The similarly propulsive ‘Rain Shadow’ also flirts with tipping over the edge, but it only contorts into new shapes; as erratic and volatile as it is, the album never fully gives into chaos. For perhaps the first time, and with painterly clarity, Mohawke offers more than a glimpse of what the sky looks like after all the jolting pyrotechnics: While ‘Stump’ might have served as a short reprieve on a previous HudMo album, here its iridescence stretches out through the atmosphere, allowing us to revel in the wonder. Paired with ‘Dance Forever’, their depictions of eternity are two sides of the same coin; Hudson Mohawke ensures you don’t have to pick one kind of pleasure over the other.

Album Review: Hudson Mohawke, 'Cry Sugar'With a debut full-length as hyperkinetic as 2009's Butter, it's no surprise that Hudson Mohawke never ended up settling into a single sound, as popular and distinctive as it may be. Having racked up credits for Kanye West, Drake, and Pusha T, the Glaswegian producer...