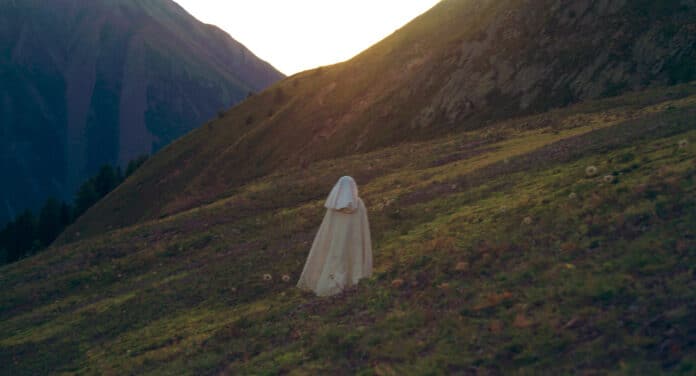 In Thunder, the shapeshifting debut feature from Geneva-born filmmaker Carmen Jaquier, sexual awakenings clash against biblical teachings at the onset of the 20th century. Set against brisk valleys and woods, the movie follows 17-year-old Elisabeth as she returns home from a five-year stint in a nunnery. However, her departure from the convent, backdropped against summery green Swiss hills and golden midday light, doesn’t lead to a Sound of Music-esque saga. Rather, Elisabeth’s God-fearing lifestyle quickly comes spiraling down as she’s forced to confront her burgeoning sexuality: something long repressed under the roof of Catholicism.

On the heels of her older sister Innocente (subtlety be damned)’s death, Elisabeth ditches her rosary for a shovel, filling the gap in her household’s domestic labour. Quickly, she’s overwhelmed by the liberties of a secular life and scavenges her late sister’s diary to find solace in her death. To Elisabeth’s surprise, she learns the once-righteous Innocente experienced an erotic coming-of-age, catapulted into a world of secret pleasures. For her, faith and sexuality were fundamentally linked. Innocente’s diary becomes a new bible for Elisabeth. It navigates her through the depths of her own sexuality as she embarks on an orgiastic journey of liberation with three local boys. Together, the foursome tango with forbidden desires and pursue an independence long eroded by the repressive arm of piety.

In the tradition of Laura Palmer, hidden truths of a departed loved one surface with their diary. Innocente’s intimate passages guide Elisabeth through her own self-discovery. The ink blotch-stained pages unleash a sexual awakening so potent it undoes Thunder’s both formal and narrative conventions. The film’s world bends at the introduction of lust, incorporating surreal and genre film imagery. There’s a psychedelic interlude of sexual exploration reminiscent of Angela Carter’s magical realist tales of adolescent lusts. Eerie masked figures initiate a psychosexual frenzy across enchanted woods. Then, all at once, the restrained period piece aesthetics buckle into a passage of saturated, noisy overload. Even the soundtrack turns anachronistic, sidestepping the booming church choirs which haunt earlier scenes. Everything overflows and Elisabeth’s body becomes fever-struck. While she eventually recovers, the seed’s already planted. Sexual desire manifests as everything her chaste world isn’t.

Thunder is at its best detouring into “vulgar” aesthetics as teenage rebellion ruptures the grip of a classical film form. The tensions between two worldviews (one devout and restrictive, the other fluid and free) unfolds in the opposed stylings the movie oscillates between. As Elisabeth delves deeper into her freedom, even the movie’s confined temporal order melts away. A rigid editing structure succumbs to a free-flowing rivulet of images, dancing across sprawling valleys with no causal linking between shots. Exposition falls wayside, replaced by long wordless stretches. Jaquier launches a full-arsenal assault against the institutions of repression and observes how these same forces dictate how movies are constructed. She subverts a film form rooted in tradition: a deceptive maneuver for a movie initially grounded in the familiar aesthetics of an early-20th century, rural period piece. At times it’s excessively blunt, but nonetheless welcome. Thunder’s form beats alongside its protagonist’s heart, tossed into a whirlwind of emotions, searching for a long-withheld freedom.

TIFF Review: Thunder (2022)In Thunder, the shapeshifting debut feature from Geneva-born filmmaker Carmen Jaquier, sexual awakenings clash against biblical teachings at the onset of the 20th century. Set against brisk valleys and woods, the movie follows 17-year-old Elisabeth as she returns home from a five-year stint in...