The Most Famous Paintings That Feature Gambling 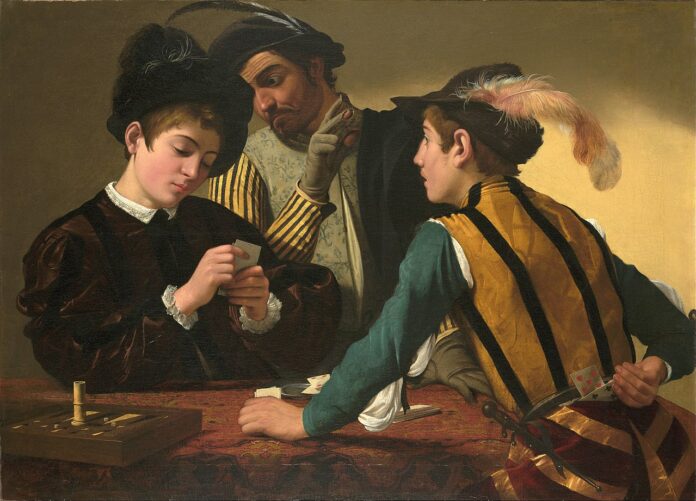 Whether you’re a fan of gambling or not, there’s no denying that it can be an interesting and visually appealing topic for paintings. In this blog post, we’ll take a look at some of the most famous paintings that feature gambling scenes.

From poker games to horse races, these paintings provide a unique glimpse into the world of gambling. So, if you’re interested in learning more about this subject, keep reading!

Digital art has become increasingly popular recently, and online casinos have quickly embraced this new medium. Thanks to technological advancements, online casinos integrate digital arts, augmented and virtual reality, digital payments, and even blockchain technology into their games and platforms.

As a result, online gambling is becoming more immersive and interactive than ever before. Players can find detailed information about Paytm digital payment and the use of blockchain technology in online casinos. Online casinos offer a wide variety of digital art, from detailed illustrations to simple animations.

Digital art allows casino game developers to create more immersive and realistic games. It also allows players to interact with the game in new ways. When we think of art, we usually think of paintings and sculptures. But art can be found in many different forms, including casino games. Online casinos now incorporate artistic elements into their games to make them more interesting and visually appealing.

This can include anything from beautiful card designs and fonts to power-ups and bonus games. While this might not be considered “art” in the traditional sense, it definitely adds a level of appeal to the games that were not present before. By adding these artistic elements, casinos are able to give players a more immersive and enjoyable experience.

Casino scenes have been popular subjects for artists throughout history. From 15th-century Italian Renaissance paintings to 20th-century Impressionist works, gambling has often been used as a way to depict the highs and lows of human nature. Here are some of the most famous paintings that feature gambling:

This 17th-century painting shows a group of young men engaged in a game of cards. The painting is set in an interior, and a window lights the figures in the background. Caravaggio uses light and shadow to create a sense of drama, highlighting the deceit and trickery that are often part of gambling. The central figure is a young man who is being cheated at cards by two other men. The young man’s expression is one of surprise and confusion, while the men who are cheating him appear to be triumphantly mocking him. “The Cardsharps” is considered one of Caravaggio’s most successful paintings, demonstrating his mastery of light and shadow. The painting is currently housed in the Kimbell Art Museum in Fort Worth, Texas.

“The Hay Wagon” by Pieter Bruegel the Elder

This 16th-century painting shows a group of peasants gambling on a wagonload of hay. While the scene may seem lighthearted at first glance, Bruegel is actually scathing in his critique of gambling, depicting it as a foolish pastime that leads to poverty and ruin.

This 1873 painting is a controversial work that caused a scandal when it was first shown publicly. It depicts two women engaged in a game of cards, with one woman eyeing her companion’s winnings lasciviously. The painting was seen as scandalous because it showed women participating in a typically male activity, and it was also rumored that the two women were actually lesbian lovers.

“In the Casino” by Pierre-Auguste Renoi

This 1879 painting features two fashionably dressed women in a casino. Renoir captures the gaiety and excitement of gambling, while also hinting at the potential dangers of addiction.

“The Dice Players” by Paul Cézanne: This 1896 painting shows two men engaged in a game of dice. Cézanne portrays gambling as a serious pursuit, with the men deep in concentration and lost in their own world.

Georges de La Tour’s “The Cheat with the Ace of Clubs” is a painting that depicts a cardsharp in the act of cheating at cards. The painting is thought to be a moralizing genre scene, intended to caution viewers against the dangers of gambling. The painting’s Last Judgement theme is also evident in the presence of death, which is personified by a skeletal figure in the lower right-hand corner. La Tour has given the figure of Death a traditionally female form, perhaps to underscore the idea that gambling can lead to one’s downfall. The painting’s dark palette and use of chiaroscuro creates a sense of foreboding, which adds to its didactic message. “The Cheat with the Ace of Clubs” is an excellent example of La Tour’s skill as a painter and his ability to create moralizing genre scenes that convey both a warning and a sense of awe.

“At the Roulette Table in Monte Carlo” by Edvard Munch’s

Edvard Munch was a Norwegian painter who was part of the Expressionist movement. One of his most famous paintings is “At the Roulette Table in Monte Carlo.” The painting depicts a group of people gathered around a roulette table in a casino. The scene is full of movement, with the players leaning in to place their bets and the spinning roulette wheel creating a sense of dynamism. The colors are also striking, with the black and red of the table contrasting sharply with the white of the players’ clothes. This painting captures the excitement and energy of gambling, while also hinting at the potential danger of addiction. It is a fascinating work by a seminal artist and provides a glimpse into the world of casino culture.

“The Card Players” by Paul Cezanne’s

“The Card Players” is a series of paintings by the French artist Paul Cezanne. The paintings depict peasant men playing cards in a rural setting. Although the paintings are highly stylized, they are considered to be among Cezanne’s most realistic works. The series is believed to be a comment on the human condition and a study of the relationship between form and color. “The Card Players” is widely considered one of Cezanne’s most important works, and it has been exhibited in many prestigious museums worldwide.