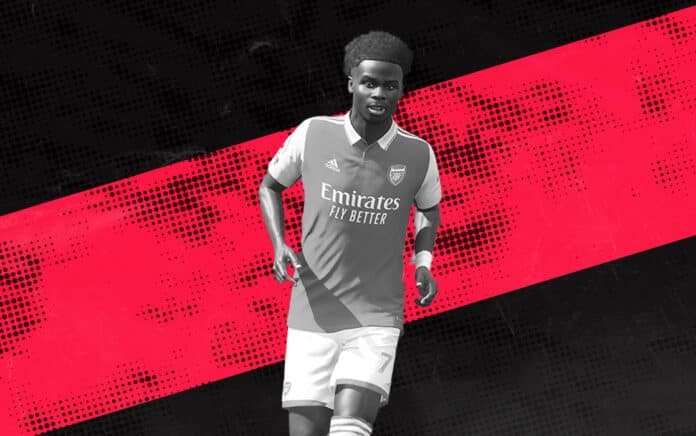 The right-midfield and right-wing positions have been played by some of the most majestic players in football history, including the likes of George Best, Cristiano Ronaldo, and Lionel Messi — especially in their younger years. In this helpful FIFA 23 guide, we’ll look at some of the most exciting prospects you should be scouting in career mode.

Saka has already faced some tough opposition within his professional footballing life, having played for Arsenal in the Premier League and the England national team at the Euros — even reaching the final in which he missed a decisive penalty. Yet, he is rightly regarded as one of the most exciting talents to come out of Europe in the last few years. Only at 21, Saka has made over 106 appearances for Arsenal and over 20 appearances for England. He is a well-experienced left-footed youngster with a lot to offer with his speed and willingness to push the ball forward on the pitch.

Within FIFA 23, Saka doesn’t disappoint. He starts with a solid rating of 82 but can reach the potential of 89 rated player. His movement attributes are imbecile and are complimented nicely by his dribbling and crossing ability. In terms of the transfer value, Saka starts at €60.5 million but can be acquired through a release clause of €127.1 million. As expected, Saka has a real face scan and can also be switched to play on the left side of the field.

Norway’s Antonio Nusa is only 17 and has already made a mark for Club Brugge, having played eight games for the side and scoring his first goal against FC Porto in the Champions League. Internationally, he has made several appearances for Norway’s U17 side but will look to progress through the ranks in the coming years with his growth.

Game-wise, Nusa is somewhat of a hidden gem. Rated only 68, he can be underlooked against the many others who are in his starting position. However, his potential of 88 is what makes any career-mode manager excited. Like Saka, Nusa has spectacular movement attributes and can grow into a beast within the game. He possesses technical dribbler and flair traits with 4-star skill moves, making him a fun player on your team. When it comes to money, Nusa is cheap, coming in at €3.3 million transfer value with a release clause set at €7.9 million. Sadly, Nusa doesn’t have a real face scan within the game yet, but we’re sure that will change in the next few years.

Brazilian winger Sávio is one of many exciting prospects to come out of the country in recent years. He has established himself as a solid player for PSV, who is currently loaned out from ESTAC Troyes. In terms of appearances, he’s only played for PSV once but has made several appearances across the Brazilian youth national sides, including games for the U15, U17, and U20 sides.

Only at 18, Sávio is a relatively exciting player within the game, possessing solid movement attributes and an admirable ability to manipulate the ball with control and skill. Sávio initially starts with a rating of 70 but can grow into a savage-like player with a potential of 86. He can also be adapted for the CAM position if you’re unsure of his ability on the wing. He has no release clause but can be bought for upwards of €4 million when his loan period finishes at PSV.

Italian winger Matteo Cancellieri has already made an appearance for his senior national side and Lazio’s first team since being on loan from Hellas Verona. At only 20, Cancellieri is establishing himself as a rising star in Seria A and looks to continue his quick success with more goals and appearances within the 2022-23 season.

When it comes to the game, he has a sweep of great traits, including flair, outside foot shot, long shot taker, and speed dribbler. As you can guess, he has solid movement attributes accompanied by his dribbling and ball control. Within the career mode, his market value begins at €7 million. For a player with a 73 overall rating and a potential of 86, that’s more than fair.

Kayky is a talked about name among Man City fanatics, mostly because he has been showing great promise since being picked up from Fluminense FC. While only having played one game for Manchester City, the 19-year-old has already made four appearances whilst being on loan at F.C. Paços de Ferreira. Back in 2019, Kayky also made two appearances for the Brazil U16 national team.

If you remember him from FIFA 22, then you’ll be happy to know that Kayky is just as thrilling in FIFA 23. With a small rating of 66, Kayky can grow into a beast with a potential of 86. Kayky’s fastidious movement attributes make him great for counter-attacking football. He is a steal at only a market value of €2.4 million and can fit many EFL League One and SPL sides looking for a player that can grow into a world-class talent.

Madueke is another thrilling prospect currently playing for the Dutch side PSV. The 20-year-old Englishman is well-established in Eredivisie, having made 46 appearances and scoring ten goals for the side. In addition, he has played for England’s U21 side four times after making more than a few appearances for the U16, U17 and U18 national sides.

In the game, Madueke is highly compelling, with an overall rating of 77 that can grow into a mighty 86. Although he is still only 20, his majestic movement and dribbling make us wonder why he hasn’t been called up to the senior national team. Southgate bias? Well, who knows — right? As a significant piece at PSV, he has a market value of €23 million but can be bought for €36.8 million if you go for the release clause. Luckily, Madueke does have an accurate face scan within the game for the pedantic hoping for a detailed squad.